But chiefly pinching ideas off the internet.

1. First internet idea – pompoms made of plastic bags. I’m sorry, I can’t remember whose idea it was, but I thought it was an interesting idea.

Then I spotted instructions for making a ladybird in the instruction leaflet from my pompom maker. [Yes, I know you can make pompoms with two circles of card, but I bought myself a pompom maker. OK?]

Now – this little fellow, who I have just na 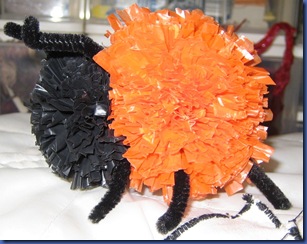 med William [because he’s orange, obviously] is either an ironic comment on nature and plastic bags – or he’s naff. Personally I am leaning towards naff but cute. He has no spots because I couldn’t work out how to add them – the leaflet suggested glueing on bits of wool which I found a tad unhelpful – and no eyes because I couldn’t find my googly eyes.

While I was wrapping the plastic round the pompom maker I had ideas of making him lots of brothers and sisters, but after I’d added the legs and feelers I decided it was too much like hard work.

2. Second internet idea is from the ‘Between the Lines’ blog. The great looking originals were 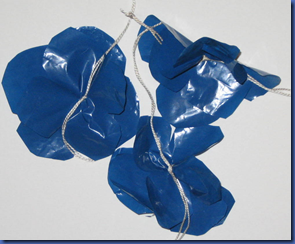 leather – would it work in plastic?

Mmm – that’s a definite ‘maybe’. I think it’s partly the colour – perhaps a few more shopping trips to Superdrug are called for, to supplies to make pink ones? 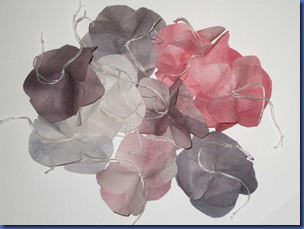 They look great made from Colour Catchers, but CCs aren’t litter…

[I did some research and apparently most litter is either smoking or fast food related – which matches my own more limited observations.]

3. I put those on one side for the third internet idea from Aunt Peaches. [Well worth looking around both those blogs, for two very different but equally appealing aesthetics.] 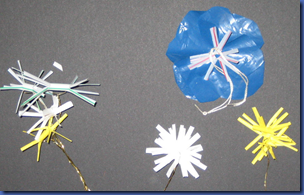 It’s not quite a chandelier, but these are my efforts.  The ones on the left are the original design.

Then I tried leaving a shorter gap between the two cut ends, and squashing the straw segments flat.

The result looked as though it would liven up a flower from internet idea 1. I haven’t quite perfected the method of attachment, but definite more interesting. Pink ones with white stamens, perhaps?

Photographing them on the black paper made me think of the work of Mrs. Delaney – which gives me a whole new set of ideas…

And the exploding paint tin? Felt like tragedy when it happened, but is starting to seem like farce. I decide I wanted to add some webbing spray to a page of my sketchbook. I should make clear that this was NOT Krylon webbing spray, but a can I bought in a sale from a DIY chain which no longer stocks that make. [Could be  a reason fro that.]

In taking the top off the can I knocked the spray nozzle off – and the $**&”!%& stuff began to spray everywhere. I put my finger over the end and panicked – couldn’t think what to do. Go out in the garden? I didn't want nasty black stuff all over the grass. I headed for the scullery, yelling for Wensleydale  – but still couldn’t decide what to do. Don’t want it in the sink, don’t want it in a bucket, why did I come in here, better out in the garden…

W. arrived, a tad calmer than me, and said ‘plastic bag’ – he grabbed a bin bag and we shoved the hissing beast into it. Then, bless him, he helped me clean the overflow off the floor, the sink, my specs, myself. I can recommended Tufanega cleanser and Superdrug exfoliating mitts – though I still have trendy black nails, albeit on only two fingers…

you have to laugh really! all in the pursuit of rubbish. I hope you saved the result of the sprayed plastic bag!
Sandy