that having done nothing for college while we were away, I’d be busy  making up for lost time.

POT has progressed – this is how he looked on Saturday.  I though there would be a lot of envelopes waiting when we got back – but we appear to have had very little post. [The postie has made up for it since.]

I’ve been collecting envelopes for about a month and POT is just over 2 feet long – which means that by Christmas when he is due to be handed in – he could be 6 feet long. And if I carry on till the degree show [aaaaagh!] – he could reach the 20 feet Sue the tutor suggested when she looked at my first 9 inch effort.

Not sure she really meant it seriously … 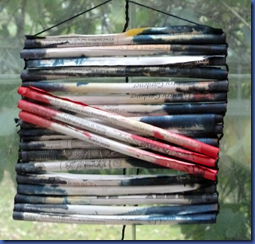 Today I managed to get round to assembling this lot, which have been sitting on my desk for too long. This one [‘No Entry’?] is definitely not long enough, and it would be better if the diagonals were higher up – but I was interested in whether the technique would work – and as you can see, it did.

But three a day? Depends what you count as three.

Baby Bellerina has a birthday soon, and I had a request for a bag for her ballet kit, as part of her present. A pink 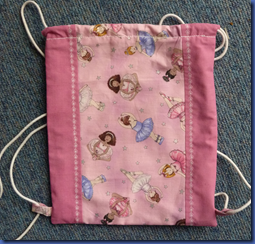 one. With dancers on it.

With a little help from the members of the British Quilt List, I found some fabric [thank you Angelika] and made this.

Not sure her mum will be able to wrestle her tutu into it, but it should take her shoes and cardigan.

Babybel’s mum also asked for a couple more aprons for herself, a bit longer than the last one. That ought to have been a quick job – but of course I couldn’t resist adding contrasting bindings, and pockets, and embroidery. Or, unfortunately, making mistakes, unpicking, resewing, unpicking etc. etc. etc..

Last but not least, the VHC needs a Christmas stocking. His big sister has one, and I can just see his little face looking at me saying ‘Where’s my stocking, granny?’ OK, he will only be 4 months at Christmas, but he has a very expressive glare.

I’ve got as far as cross-stitching his name for the top, and tomorrow will be spent making some patchwork for the rest of it. And quilting it, if I get up early enough.

And rolling up envelopes.

And trying to find my recipe for Christmas cake, which has to be made in half term week. It’s a tradition. I used to make Christmas pudding and mincemeat as well, but we don’t really like the first and don’t eat enough of the second to make it worth while.

I’m exhausted just thinking about it. Good job I have a good excuse got not going out much at the moment…

POT is seriously beginning to grow on me (as well as you, haha). Might it really be 20 feet? That would be awesome. Please could you explain how you are joining the tubes together? I can't magnify the picture big enough to see how it is done. Perhaps Wensleydale could make a little video of you doing this?? Could go viral on YouTube. Or even play dramatically over the 20 foot installation at the degree show...