Silence returned to this blog -

because, firstly, the school holidays meant extra grandparenting. The VHC requested that he come to our house, play in our garden, and have a bath - which requests were granted. However even the beautiful weather didn't prevent him becoming bored with this choice of events, so a few other activities were organised. Manor Farm being out of favour, we enjoyed:
- an Easter egg hunt at Mottisfont (one of at least 4 they went to, although we didn't attend the others);
- a trip to Eastleigh Lakeside railway (a.k.a. 'the little trains');
- and Winchester Science Centre, where the VHC explored parachutes, the rowing machine and the crane, while his sister spent at least 45 minutes on the 'Stem Cell Volcano' (think a 2 metre diameter, horizontal 3D pinball machine). I don't think she learned much about stem cells, but she had a lot of fun, and I got an upper body workout providing the power which raised the marbles - er, stem cells - to the top of the volcano.
Secondly, it is nearly the end of the semester, which meant we part-timers had to prepare and mount, a small exhibition of our work this year, together with our portfolios and other evidence that we had actually done some work this year.
You may have detected a slight conflict of interests here. This was made worse because Uni was operating on West Sussex term dates, so were on holiday for a week before and a week after Easter. The children's school was not, so they are on holiday for two weeks after Easter. This meant that set up day (last Monday) was also a grandparenting day - the busiest grandparenting day because they weren't in school and Mondays incorporate a swimming lesson. For other reasons, things got very complicated, and we ended up having the little guys overnight, but granddad coped - and so did I, despite a bad night listening for voices and/or footsteps. The exhibition is up, the supporting portfolios etc. are in place, and I can relax till take-down day, which is next week. On a grandparenting day, naturally.
When I was doing the Foundation Degree, I usually ended up with something relatively simple to display. Wall hanging? Just need a pin in the wall. Cardboard 'treasure chest' (3D piece)? Just needs a plinth. Rolled paper tubes? (It was a textiles degree, despite all the evidence to the contrary.) Hang a few on the wall, pin up some photos, unroll the several metre long collection of rolled envelopes held together by string - done. 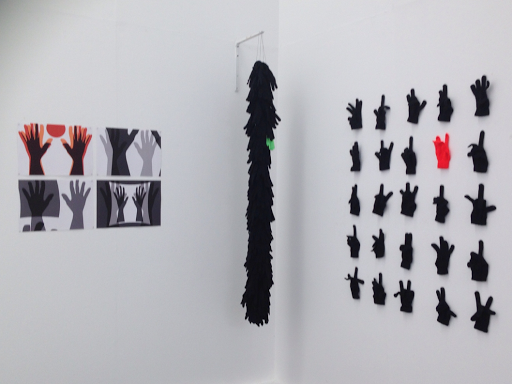 This time, things were a little more complicated. First we had to prepare the walls: the original plan had involved polyfilla and paint, but unfortunately (not) there was no paint, so after an emergency text to my long distance DIY expert, who fortunately had a lull in the grandparenting, I successfully polyfilled several small holes. Then some more after I'd hammered panel pins in the wrong places.
I had a 2 metre long column of gloves to suspend in a double-story space. A bracket, installed by the helpful technician, solved that, but I had to climb up the step ladder to tie the gloves on, and I don't do step ladders, or reaching up while holding 2 kilos of gloves.  And of course whenever I went up I got to the top and realised I had forgotten something, so had to go down again.
Then there were prints and more gloves to fasten to the walls. This involved lots of bending down and climbing up (on a stepstool, fortunately) with long measuring tapes, metre rulers, spirit levels, and plumb lines (except that I had forgotten to take a plumb line and had to extemporise with my scissors and some yarn from the textiles room). It also involved a pin push and some pins, till I broke the pin push. Fortunately I had some panel pins and a hammer - and big pockets, in which I could stow most of the aforementioned.
But a stepstool, a poor head for heights and arthritic hips are not a good combination, and I was very glad to finish and come home.
If I have a long day on my feet, I often get cramp at night, and Monday night was no exception, so that was another wakeful night. Despite this, I had a lot of energy in the morning, so I decided to tidy my workroom - which involved a lot of of bending down and climbing up on a stepstool, plus moving heavy things from A to B - and - often - back again. I was fine till I sat down at lunchtime, but standing up again was something of a challenge. My joints told me very clearly that all this was not a good idea...
Attentive readers of this blog may remember that just after Christmas I announced my intention to make two ornaments a month, in order to decorate an Advent bough next December. I managed 3. Since then things have gone very quiet on the Advent decorations front. This was because I decided to focus on Uni work until the end of the semester and then catch up. The semester is not quite over yet, but I decided that this afternoon I would get started. 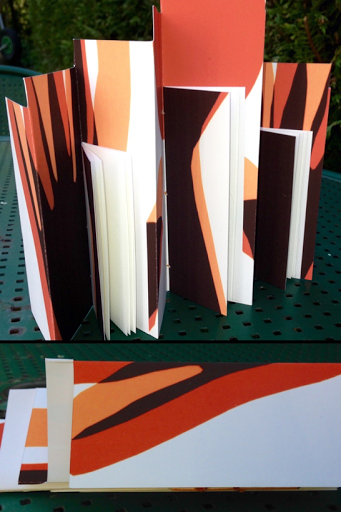 So, inspired by this, I made a book. No, it isn't one of the decorations. While I was looking through my extensive Pocket collection to find Christmas decoration instructions, I came across the picture on that link, and was sidetracked. I didn't have any interesting paper in a large size like the example in the picture, but I did have an A3 misprint of one of the images from the exhibition, so I made a quarter size version. 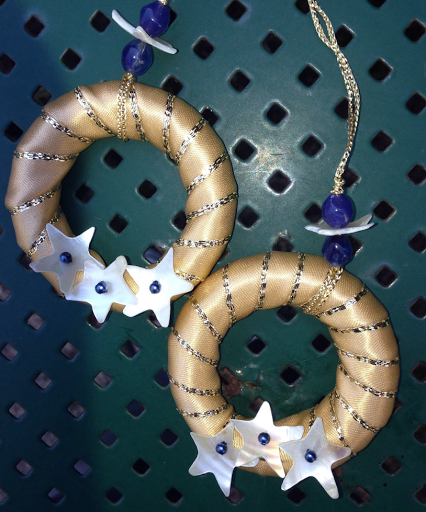 Today I did get round to the Christmas decorations, using my own non-Christmassy colour scheme. Not quite according to the instructions  (now there's a surprise), which involved hot glue. Glue and I do not get on at the best of times, but hot glue? A recipe for disaster, I much prefer a needle and thread. Now I have to decide if these constitute 2 decorations, which means I have made 5, and only have half of March and all of April to do - or only 1, which means I am still 4 down. I think that question may only be answered when we get to December, and I see how many I have managed...
Posted by Cda00uk at 19:40

Hi Celia,
I started taking magnesium which has helped night time cramps and jumping legs wonderfully. I get the Sainsbury version because 3 for 2, you know. but I take two of them morning and night. Sometimes I have run out and wondered if it matters, only to find out in about 2 days that it 'Really' does!
All the best for comments and such for your exhibition. perhaps a glove affectionado (oh Google says it is aficionado) will offer to buy? ;-)
Sandy