What to do after C&G?

Yesterday was the first session of the 'Contemporary Textile Workshop' at Eastleigh College which I signed up for, post C&G. It is taught by Sue Chapman, who is the P&Q teacher and also taught my 'Creative Sketchbooks' course, and Terrie Hitchcock who is the new embroidery teacher. I wanted to sign up for it because I know Sue is a good teacher and I had been told Terrie is - and because the work exhibited by last year's students was amazing.
So A. and I toddled along yesterday, not really, in my case, knowing what to expect - but having a good idea that we wouldn't be doing any sewing. Good job, as although I had everything apart from the kitchen sink, I had forgotten my specs.
We were told that the course will focus on design -great, just what I need - and that while last year they had looked at colour, this year it was mark-making. Less great- despite a recent outbreak of black and white I like colour. Preferably lots of it and very bright. I feel much less confident about mark making - so it is probably a good thing really.

We were given trays with pieces of paper towel in them, on which Quink had been drizzled, and strips of B&Q heavy duty lining paper.
Take note of the exact specification - I am a lining paper fanatic, ever since the guy who decorated our living room 2 years ago left me a roll of the stuff he used. Believe me, that didn't come from B&Q and when I discovered how much it cost I decided to use it very, very, carefully.

The B&Q stuff is pretty good [I understand the non-heavy duty isn't] and has different textures on each side, one cream and smooth, the other white and grainy. Of course, asked to do pattern - some of us came over all representational... I realised again that when asked to do this sort of thing I don't do it BIG enough, so what I do can look mean and uninspiring.

The rest of the day was spent monoprinting. I am ambivalent about monoprinting - other people produce some wonderful stuff, but I am always disappointed by my own efforts. Which is why you are seeing only a limited sample here. We were initially restricted to black and white but allowed a little colour in the afternoon, so I got out the Koh-i-noor. I think if I was clever enough I could make monoprints that looked like linoprints - but then why not make linoprints? 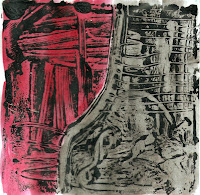 We have the month until the next session to develop some ideas for stitch. I was feeling pretty disheartened about it all this morning [not helped by another insomniac night] - but when I returned to my book of the month, 'From image to Stitch' I realised that monoprints could replace ink jet prints. and almost anything looks better if you cut it up.
I had an outbreak of the 'What if's' - so I have spent much of today following some of them up. No pictures as they are still drying - I don't want too much sticky acrylic paint on the scanner.
Unfortunately it was only right at the end of today that:

Sue and Terrie encouraged us to print on tissue paper and Bondaweb it to fabric - but- what if I print directly on to Bondaweb? I thought it might not work, and the prints are pretty smeary, but that may just be my poor monoprinting technique.
I am thinking of making a vessel, [continuing with the Tamsin Van Essen theme] so what if I print directly onto craft Vilene? Again - a bit smeary - this was early on in the session, so I need to revisit it.
I tried several other fabrics - poly satin worked well but looks best from the reverse side so I have a good print on the matte side, or a darker, less subtle print on the shiny side. Scrim worked surprisingly well, and was good for squeezing out a second print. Curtain lace doesn't really show the pattern but looks good anyway. Some linen-look poly also worked well, as did the same black cotton I used for the Inkaid.
Speaking of which - I made two paper samples, one with Inkaid on a rubber stamp and one with a natural sponge. They are drying at present but I will try printing them tomorrow and see how they look. If the idea works I will try it on fabric. Another what if - what if i use Inkaid on some hand dyed fabric [not black]?
Posted by Cda00uk at 18:47