Imagine, if you will…

a window lying flat on the ground. As the frame is raised slightly above the glass, it forms a shallow trough.

It starts to rain. The trough fills with water and eventually overflows.

Now imagine that the window is not lying on the ground, but is a skylight which has inadvertently been left open overnight. A night on which it rains. Heavily.

And of course the trough still contains water, so when you try to close it …

The one good thing was that it was the kitchen skylight [a tile floor] and not the one at the top of the stairs [carpet].

As it has been raining intermittently all day [and looking as if it will rain much more often] we postponed our planned trip to Art in the Garden – which means I have done a bit more ‘drawing’. As a substitute, I decided I’d do a bit of art in my garden, inspired by Richard Shilling and Julia Brooklyn’s ‘Land Art for Kids’.

Flick through the book on the link, admire their work – and then have a laugh at – er – enjoy mine.

I thought I would just go outside, plonk down a few leaves on what we laughingly describe as a lawn, and take a few snaps before the next shower.

Of course it would have helped if I understood my camera – so that the pictures would all turn out more or less the same [reasonably natural] colour.

It would also have helped if it had been less windy.

But I found that it isn’t that easy to find leaves that are roughly the same size, and that will lie flat. I also ended up moving the arrangements from one part of the ‘lawn’ to another, because the fig leaves looked better against the yellowy moss, while the ivy and whatever that purple stuff is looked better on one of the few patches that have a some grass in them. I also discovered that unripe figs ooze a sticky white sap, which gets on your leaves and spoils them. And blackberry flowers hook themselves on their own thorns if you’re not careful. 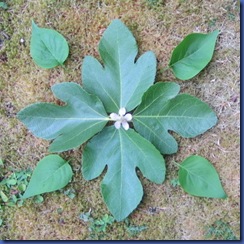 I think nature was fighting back.

But I ended up with one image I like.

And I'm sure that Babybel, who I bought the book for, will do much better than her granny. 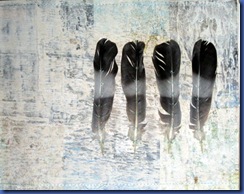 When it began to spit with rain, I came inside and did some indoor land art. Feathers from the ‘it will come in useful one day’ box, and a piece of paper I’d covered with tourist brochures and emulsion paint ages ago, and which came to light when I was looking for some hand made paper. Feathers held down with double sided sticky tape [a mistake] and stitch.

Never did find the handmade paper…

While I was in a conceptual artish sort of mood…

on of car park tickets from the glove box. Of course I put them into the aforementioned ‘it will come in useful one day’ box.  Today I fished out some from last summer, stuck them in the homework book, painted them with cheapo paint from Early Learning and blue Quink, used a bit of bubble wrap to lift paint from one page and print it on the opposite side [that page was under-painted before I made the book] – and I have a record of what I did last summer. Mostly go into Winchester on the Park and Ride … 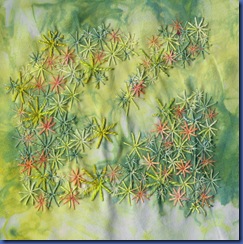 And finally - this is another drawing which I finished last night. It probably took more time than all the others put together, but it is much more my sort of ‘drawing’.

Except that tomorrow we’ll be putting up the college end-of-year exhibition, on Thursday its the gym and meeting the external examiner, on Friday I’m stewarding and on Saturday it’s the gym and taking the exhibition down, all of which may slow me down a bit …

You really are on a roll, aren't you?! Your blog is always interesting and makes me feel very lazy. I have given up on C&G Diploma as not enough time or inspiration, but I think I might try the 100 drawings exercise especially as I so love your interpretation of "drawing". I love the collage and the photos on the lawn. Good luck with the exhibition.
PS I also have a skylight window. And the rain swept in straight off Dartmoor last night and crash landed through it. ALL of the rain, I think. The floor DID need washing. Ahem....