Just started another cold – less than a month after the previous one. The kind donor was Babybel, always generous to her granny.

The cold may be part of the reason I spent all yesterday afternoon [came home early from college] and a significant part of today trying to couch down about half a metre of thread.

Sounds easy? Well, it would have been, if I hadn’t been trying to attach some of these to the thread – and make them w 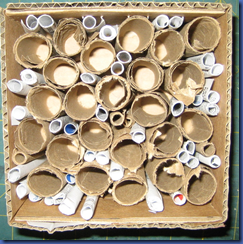 For some reason i cannot now remember and have some cause to regret, I decided it would be interesting to put lights at the bottom of this.

So I bought one of these. Yes – the reduce, re-use, recycle ethos of the 3D piece went completely out of the window.

Of course, when it came – no instructions. And Google, for once, let me down. Lots of instructions for inserting LEDs, but all of them written for electronics experts who can’t sew, rather than sewers with no knowledge of electronics.

So I snagged a passing techie who reassured me that I couldn’t blow it all up if I wired it up the wrong way, drew me a wiring diagram, and promised to come back if I got one of these. Err – I think not.

Couldn’t be easier, I thought. And it was, the first time, except that I’d wired the switch in the wrong place. So I moved the switch and tried again – and again – and again, to get all the lights to light up. Individually yes – altogether at the same time – not on your nelly. [No, it wasn’t because I’d wired them in sequence, I’d been warned that would lead to difficulties. And I kept replacing the thread.]

Finally, as I was about to give up, I decided to try some copper wire I just happened to have lying around. 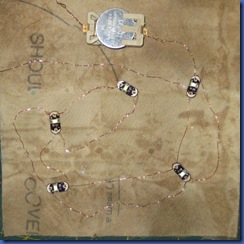 oblem had clearly been with the ‘conductive thread’ which I could not get to make a decent connection with the LEDs.

So here they are, all lit up – although you’ll have to take my word for it.

Two tips I did pick up from my Google search:

The next step is to line the drawer, insert the electronics which are sewn to a separate piece of fabric, add this red diffuser cut from a plastic file folder, insert the tubes of paper, and light the blue touch paper – switch on.

When it probably won’t work…

But the external examiner told me to try something I’d never thought I’d do. So I have. And I might even try it again, although I'll pass on the conductive thread. 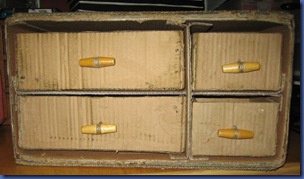 [The EE also said our work didn’t have to be beautiful, which is a good thing in the circumstances…]

In another pat of the forest chest of drawers, the result of my experimentation with string. 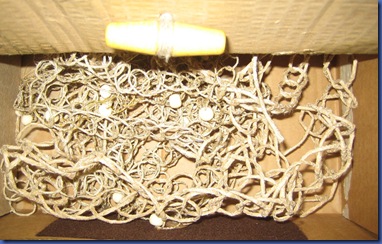 Crochet chains, some with beads, made on the biggest hooks I could find

– I knew that 12mm one would come in useful one day.

I did try some binding and wrapping, but decided that the process was too slow, and the results too small, to fill the drawer in the time. I think it needs some red, though.

So, despite my cold, and the frustrating wiring, I’m quite pleased with progress on this piece.

I am impressed! and thanks for the report on LEDs. That idea for a garment is still percolating. already it has been enough time that it has become easier than it was when I thought of it. Now I think I just need to wait for the occasion/theme to present itself for wanting them.

some many Christmases past when the Christmas lecture on telly was about LEDs.! Do they still have a Christmas science lecture?
Sandy in Bracknell