Now you see them…

Or, to be truthful, you d 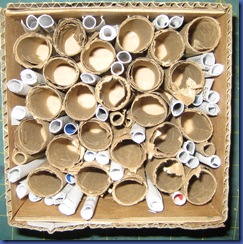 o, but in a truncated form.

My original plan was to use horizontal rolled instruction leaflets, but it became obvious that I didn’t have enough, and when I decided to  develop a theme of circles [or roughly circular forms, anyway], they had to go. End on and shorter, that is.

My second idea was to use shorter, vertical rolls of brown paper [regular readers will know that I have a lot of brown paper], but brown paper alone looked boring, even with different sized rolls, so I added the instruction leaflets, and some bus tickets as well, just for variety. At the moment they are sitting in a failed drawer with no lining – I shall have to think about the lining, as you can see it through the larger rolls.

I didn’t manage to pluck up enough courage to unpick the needle lace last night, but might manage it tonight, although I have a few more button bags to sew. It looks like 160 will be enough. [For the first time ever, Wensleydale said something which implied that he might have the teeniest tiniest suspicion that, perhaps, maybe, I am possibly a wee bit – well, shall we say bonkers?]

He might be right – although I found making the bags quite meditational, like knitting. And Radio 3 have a new series of World Music on Thursdays which went very well with itsy bitsy button bag manufacture.

So – I have one drawer of rubber bands, one of paper, one of buttons – not sure about the fourth, might be bubble wrap, might be wrapped, crocheted or turned into machine cord string – or something else I haven’t thought of yet. [Stitch? You think I should have more stitch? In the tutorial I was expressly forbidden to get too hung up on stitch!]

While I was feeling destructive I distressed the chest of drawers a bit more, with an ink pad. I have resisted the temptation to attack it with a hammer. So far. 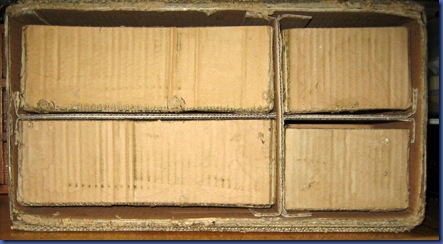 Must add the handles. 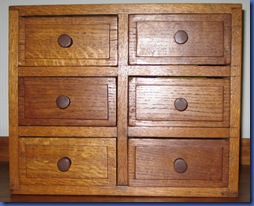 this one was made by my father in the 1950s [it’s tiny, I keep sewing tools and haberdashery in it] 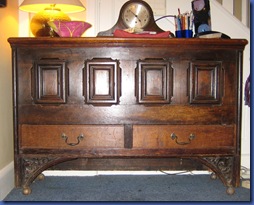 and this one by my great grandfather, a wheelwright, in [probably] the late 19th century - by the look of it from what he had lying around at the back of the shed. It is a little bit bigger –big enough to hold spare quilts in the top.

Although they probably wouldn’t approve of the rough and ready construction of mine, my forefathers would definitely approve of the recycling, a trait which  runs deep in the family [Dad had it too].

Did I mention great grandfather was a Yorkshireman?