And last Sunday’s challenge was…

to take a photo from a high angle – while Monday’s was, perhaps unsurprisingly, to take one from a low angle. Both of which said ‘stairs’ to me. I did think of lying down in the garden and photographing the trees and sky but there was too much of an overlap with ‘clouds’ and ‘green’ so I abandoned that idea.

I took several shots from the top of the stairs but the one which appealed most was this one – my attempt at the ‘lith printing’ effect from ‘Photoshop Fine Arts Effects Cookbook’. I wanted to get a slightly spooky B-movie effect and this is the closest I got. 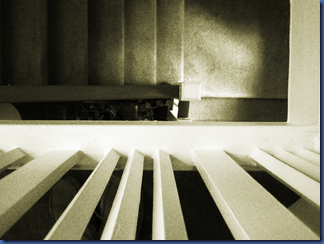 Looking the other way, I tried the ‘Polaroid transfer’ effect. That border isn’t quite right, but I enjoyed adding the wiggles.

That – and a bit of knitting - is about all the creative stuff that’s happened recently. I hope to get something college-related done tomorrow afternoon – although I suppose improving my Photoshop skills is college related. Wonder if I should put these in my PMS?

I hope you get to the exhibition.
I like your photos, perhaps I'll try some of my stairs/steps.
I fear that I am becoming a moaning old ---, sometimes its so hard to resist.