What a difference a day made.

At 2 a.m. on Wednesday I was convinced that my college work had wandered off up yet another dead end – I didn't 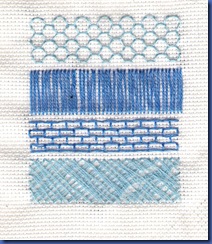 know where it was going, didn’t think it was saying anything, and I was missing stitch – to the extent that I got up and worked some blackwork samples inspired by security envelopes.

But I took some photos of the tube-y things I’ve made so far into college and begged for a tutorial.

Suddenly everything seemed much better than I thought it was:

I was very tempted to call it ‘Love and Freindship’ [especially as it was an epistolary novel] but decided that trying to show off would just lead to most people thinking I didn't know how to spell.

I have plans for 2-3 more in the outdoor series – and then I'm done up till Christmas  – apart from the paperwork, the contextualisation, the work book, and the PMS.

But I still like the blue blackwork security envelope patterns…

okay, would it be acceptable to do blackwork stitch directly onto some envelopes before you turn them into paper spills?

I do think the photos outside are really great. Not being rude or anything, but probably seeing the actual thing will be less impressive unless you can create an environment for them.
Ooh, better stop before you slap me for giving you more work!
keep going!
Sandy