but went rapidly downhill in the afternoon.

Printed off my spam messages, rolled them and added them to L&F?  √

Had an enjoyable lunch with W.?  √

A week or so ago, when I was having a procrastinating tidy-up, I came across some of the litter photos [remember those?] which I had printed off for some reason I can no longer remember. So I decided to do nasty things to them, in a spirit of enquiry and filling up space in to make a meaningful contribution to my Personally Managed Sketchbook.

So I glued tissue paper on and drew on top – although it doesn’t show much. 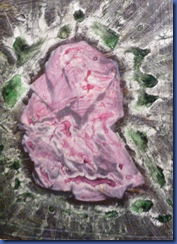 or I scratched and sanded and painted them with watercolour 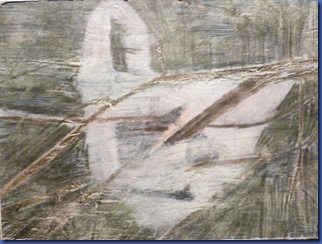 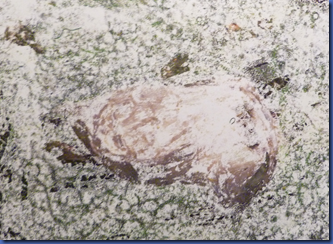 or – most dramatic of all – resisted parts of the image with crayon and then added bleach.

I tried 2 sorts of acrylic gel and plain water.

I tried leaving the image for seconds or minutes.

I tried 2 different sorts of paper, and acetates which turned out to be not the ones you use in ink jet printers [which worked well if you didn’t want a recognisable image]

I looked for the hand sanitizer I once used successfully and couldn’t find it.

And an entire afternoon, much cursing and several cups of tea later I had nothing to show for my efforts apart from a bin full of paper..

Then, in a fruitless search for the right sort of acetates, 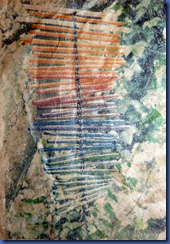 I came across something called ‘Studio Paper’, which I had bought heaven knows where, and which, though remarkably lacking in anything like instructions for use, implied that you could use it to make transfers just by printing on it and rubbing.

And you know what? You can. Even on to brown paper. 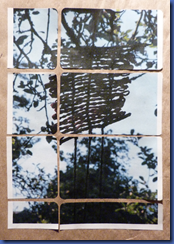 I also found some sheets of labels I never managed to work out how to print addresses on, and got a rather nice window pane effect, although the labels are a bit reluctant to stay stuck down…

So it wasn’t a complete disaster.

Plus I am pleased with these – which I expected to end up looking like lampshades, but which W. has christened storm cones. [He used to live in Whitby – it leads to him coming over all nautical at times.]

Mind you, after I researched storm cones, I can tell you that this signal means there are storms coming from both the north and the south at the same time.

Perhaps I ought to stop whingeing and look on the bright side of life. After all, I have learned that, in the unlikely eventuality that I ever do want to make inkjet transfers again – if I get out the Studio Paper I’ll have no problems. [You can wash off the remnants of your image and, apparently,  reuse it.]

acrylic medium and laser printed images work a treat (I no longer have a working inkjet). Not sure whether inkjet and acrylic gel does, though I am envious of inkjet printer owners who can use acetate and hand sanitizer.