The art of procrastination.

It dawned on me a few days ago that it is now only a month till the hand in date fro PC and PMS – I’d been telling myself it was December – which it is – but the middle of December, nit the end.

So I panicked quietly and then I decided to sort out my Picasa files. Not because this would help with either the PC or the PMS, you understand, but because it was something I’d been putting off since having an internet conversation with Margaret Cooter about it several weeks ago. It suddenly became high priority…

In the process I did remove a lot of dross from the files – and from ‘My Documents’ which I moved on to when I got bored with moving Picasa folders around. In the process I did find my ‘History of British Embroidery’ which I thought I'd accidentally deleted – not that it's relevant to the degree but someone suggested I put it on line so I might just do that [more procrastination].

The VIbirthdayP on Saturday went very well – Babybel’s clever mummy had won a free party at a local ‘children’s edutainment centre’ –or place for running, jumping, climbing, swinging, sliding, chasing, dressing up, playing ball and shrieking – so a good time was had by all. Even the VHC found something to his taste.

Sunday [in our case] was spent recovering from the VIBP.

The rest of the week seems to have gone by in a bit of a blur. The artworks in the garden were photographed a couple of days early because it was a beautiful day. I’m glad to say that some of them are beginning to look a little tatty. 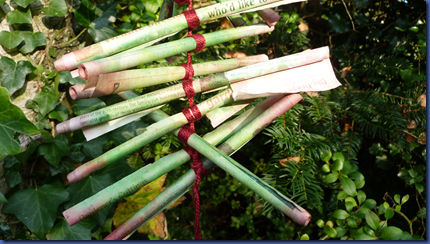 Today at college we were introduced to Module 13 [I hope not a significant number]. This one is ‘Professional Practice’ – learning about running a business, plus preparing for our graduation exhibition.

Part of the former is setting up a web presence – and unfortunately a long-established blog won’t do. We have to look at, and be prepared to discuss good and bad examples of artists’ websites – so if anyone can suggest good and bad ones, especially the latter, I’d be grateful!  I have some good ones on my Gimmee bar, but of course I don’t add the lousy ones – you know, so picture heavy they take a year to load, so clever you can’t work out how to find what you’re looking for, and in grey on black so you can't read them. Artistic? Yes. Good at communication with potential customers? Forget it.

The latter involved setting up a committee [i.e. all of us] and having an amicable discussion over lunch about what we might do – which given that things like dates, locations and contents are as yet undecided, was a bit diffiult. Yours truly was unanimously elected treasurer [this of course is because no-one else wanted to do it]. However, as we are only seeking to raise a little money to pay for publicity, I don’t think I’ll be able to retire to South America with the proceeds…

Exhibit one: lt grey on dk grey - Windsor School of Textiles
also dreadful for finding anything about the courses.

you would think...
but then again.

It makes me want to bang my head
Susan should appreciate that one at least! and may pass on the comments.
Sandy