And then there were nine.

‘Personal cloths’, that is. I just need to think of a name for it – apart from ‘number nine’.

This one was made from a collection of plastic zip-up storage bags whose zips had gone. After rolling I added smaller wrappings with shrink wrap, zapped the whole lot with a heat gun, and then incised them with the soldering iron. [I was very good and wore my Darth Vader face mask throughout – which meant I didn’t realise what an awful smell I was making till I’d finished…] 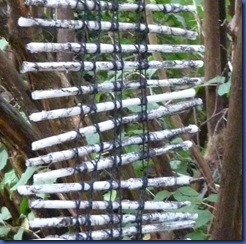 Then I sponged them with black acrylic and wiped it off again, before knotting them all together, rather untidily, because of the lumps and bumps.

It is hanging in the front garden, while I try to resolve my dilemma about whether to hang one in public [it’s litter! I haven’t got the bottle! They out to be out there! Think of it as [non] knit hacking!]

Insomnia struck again last night, but I kept to my new resolution to do something constructive, and made a little collage. The word was on a bag from Compton Verney and seemed very appropriate.

Nothing to do with tubes, but it’s going into the sketchbook as an idea when I get bored with rolling things.

Speaking of rolling things – POT and LAF continue to grow. I received an interesting donation for POT last week [thanks A.!] – all will be revealed in my next post [if I don’t forget…]

A Darth Vader mask? (I have been using my soldering iron, heating up shoe making glue for years without being good). About time I got one of those - where do you recommend?