the sun comes out, and I get productive. Today, I've actually finished two pieces - 'Untitled' and what was called 'Great Art?', then 'Elements' - and is now 'Earth to Earth' - at least for the present.

'Earth to Earth' has changed in more than name since it was called 'Great Art?'  I came across the work of Lauren Scanlon, who carries out what she calls ‘ritual transformations’ on old romance novels,  involving earth, air, fire and water. I decided to do something similar, using the Great Art dipyramids, and ending with their ashes - earth to ashes as it were.

Images here. Air and Earth were relatively straightforward, but Water got a bit exciting. We went down to Highcliffe, I carefully set up the camera on the tripod, threw the dipyramids into the sea - and had to refocus the camera sharpish as the waves carried them down the beach. Then I had to rush through the surf trying to retrieve them for the final stages, while Wensleydale sat on a rock and laughed. Fortunately it was so warm I dried out fairly rapidly. I counted 25 out,  but only 19 back - the others have probably made it to Bournemouth by now, if they haven't disintegrated. 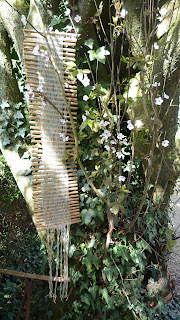 Today was Fire - and although I'd dried what were left out, they were still reluctant to burn. My original intention had been to burn them on the drive, but we ended up using an old barbecue and some BBQ lighter fluid, for a brief but satisfactory session of arson. If the neighbours didn't already think I was mad they will now.

After all that it was quite peaceful to finish 'Untitled' and take it out for some rather more sedate photography. It isn't going to live in the wild, but somehow they always look better outside.

However, over the holiday my creative streak is going to come up against Module 13 - the business related module. We got a slight concession on the business plan - we now don't have to write a full one, just 'This is what I would do if I was going to do it' - which is a relief, but as I have very little idea about the process it is still going to be  a challenge.