After a brief flurry of excitement

before we got up, it has been a very boring day.

The excitement occurred when QC decided to try to get into our bedroom through a small fanlight window. [Bad people had closed the big window – we ought to know she likes to come in that way, then straight out of the door and downstairs to see if breakfast has appeared. She has a cat flap, which is much closer to the feeding bowl, but that would be too easy.]

She has looked longingly at the fanlight before, stretching up and mewing piteously, but has never tried to get through it. This morning she made a leap for it and discovered:

She ended up hanging by her front paws from the frame, back paws scrabbling at the window below. Then one paw. Then no paws. It looked like she was auditioning for Tom and Jerry. Unfortunately I don’t keep my camera in the bedroom, - although I might start because she is quite stupid enough to try it again.

It was actually scary at the time. Fortunately she landed safely on the window sill, and could only have fallen as far as the conservatory roof underneath – which is how she gets to the bedroom window. 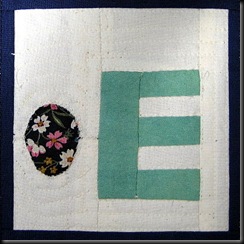 So on to letter ‘E’ – an egg in English patchwork – by which I mean that it was done over papers. Yes, even the egg – which is probably the only bit that was easier done that way than machining it. Ah, the lengths I go to to fulfil my mission.