but not history of art.

To make up for the lazy days I’ve had recently [not Wensleydale - he’s been demolishing a concrete pond] - we had a busy day today.

This morning we went to a course on ‘Tracing the History of Your House’ at the Discovery Centre. Essentially it consisted of an outline of the records available in the County Record Office which could be used for the purpose.

Our house is only about 70/80 years old but one of the questions we have is when exactly it was built – although we have the deeds, they don’t make it clear. We are also interested in the history of the land on which the house was built. We didn’t get answers to the questions on the course – but we now know where to start looking for them!

In the afternoon we went to the Hillier Gardens, as it is ‘Art in the Garden’ time again. No Border Collies so far this year, but we only saw about a quarter of the exhibits, so we may have missed one. 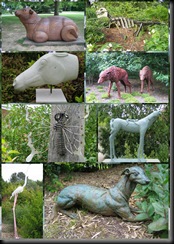 There were some other animals  - the ‘Velo-ciraptor’ [top right] by our favourite from last year, Daren Greenhow, and the wolves by Carol Orwin, [underneath it] were particularly striking. They could give you something of a shock if you came across them unexpectedly at night. 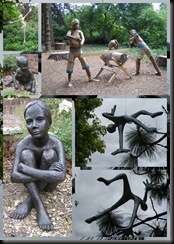 There were also people  - or angels [by Charis Jones, bottom right]. The ‘Garden Angels’ [!] were suspended from a tree.

The lumberjacks, top right , by David McDiarmid, were interesting, because of what they were made from. At first glance I thought they were wood, as the saw is. But the figures are made from one of the least likely materials for outdoor art. 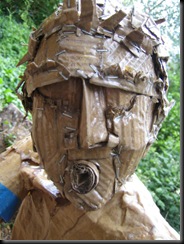 Today's photo is a close up which  might give you a clue. And if you have seen the most recent issue of ‘Fiberarts’ magazine you may also have an idea.