What I found in my scrap box

I realise that I ne 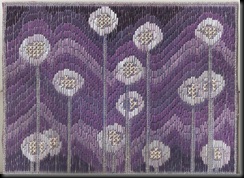 ver showed you this while It was a work in progress – not sure why!

Under all those stitches are a couple of experiments. I stamped paper with masking fluid [yuck] and then painted the paper with transfer paints. When it was dry I rubbed off the masking fluid and transferred the colour to needlepoint canvas – as suggested by Jill Carter in her book ‘New Canvas Work’. It shouldn't work because the canvas is cotton – but it does, perhaps because of the dressing on the canvas.

I made a second transfer onto some mauve-with-silver-bits sizoflor. And then I forgot about it, until my last tidy-up, when I decided to sort–of-Bargello it, with the sizoflor layered on top of the canvas. I’m rather pleased with it, especially as it also used up several skeins of embroidery floss, which I rarely use. [So why have I got so much?].

Guess what? It’s going to be a book cover.

And so is this. This was made for a challenge on a new group I joined, ‘Dye-Art-Group’. The topic was ‘New Beginnings’.

After I took the photo of the daisies I showed you a few days ago I began to think about the way they keep coming back no matter how often we mow the bit of chalk downland we call a lawn – which seemed appropriate for the challenge. The background is a piece I made years ago, experimenting with layered fabric, Xpandaprint and acrylic paint, which ended up in the scrap box because it was so bright.

I stamped it with my little flower-shaped eraser and  added some French knots, using some hand */999 –[additional input from Quality Control walking over the keyboard] as I was saying, using some hand-dyed thread that was supposed to be variegated but ended up lemon yellow with very occasional spots of orange.

It is now  waiting to have some pages added. 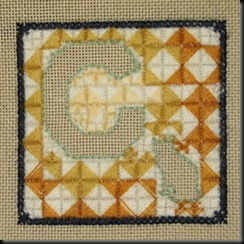 Canvas work was my first love in embroidery but I rarely do it any more – somehow it feels too easy, which is a stupid way to think. Especially as I inherited the stashes of two other needle pointers and bought what looks like most of  a bolt of canvas in a charity shop for £5. Got to love charity shops.