A bit of this and a bit of that

It’s been one of those days when I seem to have been busy all day but have nothing to show for it – apart from some repotted plants, but they’re not very exciting. I have finished an alphabet piece but you won’t see that till later.

Before potting the plants I had a wander round the garden – so today’s photo is a result of that. 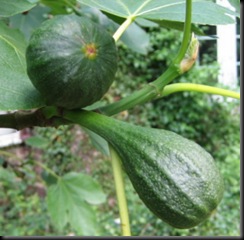 Not baby marrows but figs, as we are the proud owners of a fig tree. We don’t really like fresh figs, which is fortunate because the one certain way of telling that they’re ripe is that the blackbirds start eating them …

Apparently the Ancient Greeks and Romans associated the fig with Dionysus / Bacchus – I can't think why.

you could make fig and ginger jam - we have a fig tree and share ours the fruit with the lorikeets and the bats. my 4 year old and i are the only ones int the family who like the figs and we only eat what we can reach so the arrangement works well for all concerned :)