or more like one step out from the bank.

I know I said yesterday that I was going to show you A-K of the alphabet pieces I did before C&G – but I have decided to make that an occasional series, interspersed with daily photos actually taken on the day I post them. Like all the other photos on the blog.

This is partly because the alphabet currently stops at ‘'K' – and there are a few that post-C&G I want to redo – and it has been such a lovely day today I wanted to show you this. 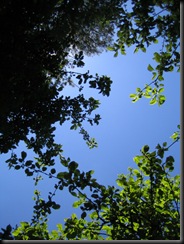 A blue sky, without a cloud in sight. Very rare these days.

Yes, I did lie on my back on the grass to take this. Fortunately that bit of the garden isn’t overlooked – and Wensleydale knows I’m nuts.

I have been thinking of using daily photos for the daily photo for a while but I was afraid it would just end up being a series of photos of our not-very-inspiring garden. [We don’t do gardening …]

So if we haven’t done anything interesting to photograph – you’ll get the next letter of the alphabet. Which should give me some time to move on beyond ‘K’ – although K is one of the ones I want to redo. Along with I and H. Clearly something went adrift towards the end, although J isn’t too bad. 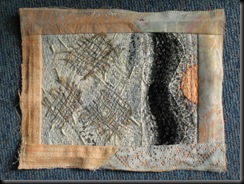 Another thing which keeps necessitating a remount is this piece from the Contemporary Textile workshop, which has been lying around deciding what it wanted to be. After we went to the Frank Bowling exhibition it asked for a border of painted fabric, which it got, with a pit of patching. Then it wanted a binding of hessian but when I tried that it seemed to dominate the whole thing - so it came off.

I decided the border needed to be narrower – which is why it’s creased. I also want to add some embroidery to the border – a few French knots, and possibly some running stitch on the right  hand side – because of course this isn't a landscape. 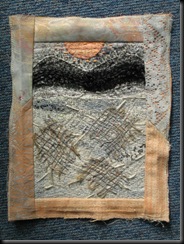 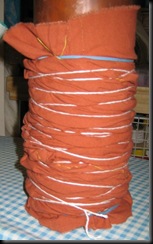 And finally – I did get round to the dyeing. Of course most people start with white fabric – but I decided to over dye some of the never-ending brown. This bit - 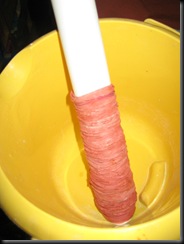 and this bit – which I’m afraid looks rather rude.

That’s the trouble with a psychoanalytic training, you can spot a phallic symbol a mile off. Except that I didn’t spot this one until I downloaded the photos and it was too late to take another one because - 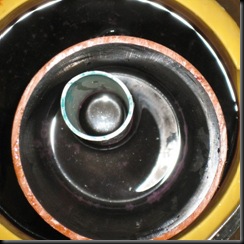 I love all the curves in this image – I think it needs to meet Paint shop Pro for a bit of manipulation. If you know what I mean.

They will sit in the dye bath until tomorrow – let’s hope the Arashi gods are smiling.