was a guided tour by Mr and Mrs Cheddar [and Ronaldo the wonder dog, of course] to a selection of Berkshire churches.

We started at Sandham Memorial Chapel, which is probably the best known. Mrs Cheddar is a WW1 buff, we are interested art – so a chapel commemorating WW1 decorated by Stanley Spencer suited all of us. The paintings are amazing and very moving – it was a thought-provoking start to the tour.

Of course I managed to find a textile! At first glance I thought the altar frontal was woven but closer examination showed that it was heavily but subtly embroidered. It is an early 20th century piece by Madeline Clifton – I hadn’t heard of her but there is quite a lot of information about her in the Chapel and ‘Embroidery’ magazine apparently featured her in 2005. Unfortunately I don’t have a copy.

Then we went on St Mary’s Church in Aldworth. This 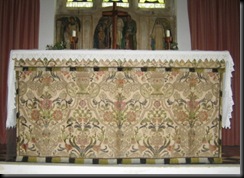 is the home of the Aldworth Giants – 14th century carved effigies of a family who seem to have been even taller than Babybel’s daddy!

It also has a rather nice altar cloth

and, in the churchyard, a ‘thousand year old’ yew – not sure how they know how old it is, but it has certainly seen better days!

Our final visit was to St Clement’s Church in Asha 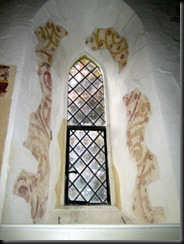 mpstead. This was my favourite of the three. It is a small church which contains a number of beautiful medieval wall paintings. 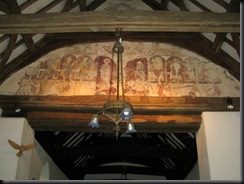 and this? And I love the [modern] dove over the pulpit, on the left – and the light fitting. 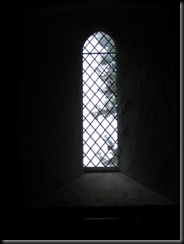 However, this is my favourite image – and today’s photo.

Thanks, Mr and Mrs C, for being chauffeur and guide.

Thank you for another lovely trip out. Don't you just love fragments of wall paintings like that?