that the best decisions are made by a committee of three, of whom two are absent.

Imagine, then, a committee of around ten, whose membership is constantly changing, and where the joint chairs, who have casting votes, are running two other committees at the same time.

I have been to college to help put up the end-of-year exhibition. I found it a little trying.

Penscombe [who has an excellent blog, by the

way] asked me to explain ‘signatures’. Sorry to get all technical! A signature is a group of pages. A simple pamphlet like this one has only one signature, made up [in this case] of six sheets of A4 paper folded in the middle, nested inside one another and sewn into the cover. Each sheet of paper is called a folio.

The sample book had five signatures, each of three folios.

I used to know why they were called signatures and folios but like a lot of other things – I’ve forgotten.

Incidentally, I can’t claim resposibitly for the idea of using sequin waste for a spine – I got it from Carol Clasper.

I haven’t had time to take a photo today [took my camera to college and then totally forgot about it] so since it is nearly July I will move on to July's theme. 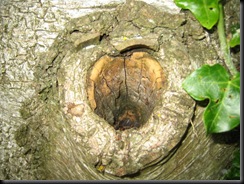 So here is the first one – a hole in a silver birch – nice contrast with the ivy, I think.

Unfortunately I have been neglecting Lynda and Carol’s excellent course, but I hope to get back to it now the worst of the end of term madness is over. [Just stewarding and taking the exhibition down to go – and that is definitely not going to be decided by a committee …]