One thing led to another.

I’m not sure what I meant to do today, apart from recover from our hectic long weekend – and brace myself for tomorrow, when we are expecting a small visitor. I think I envisaged sitting in the conservatory finishing off the letter ‘M’.

But I decided first to tidy my workroom a bit. Only a bit – nothing too strenuous.

After the first sinking feeling of ‘Where the hell do I start?’ I decided to stick some of my accumulating heap of postcards, brochures, etc. in the journal, a.k.a. ‘compost heap’. But the white pages were boring so that meant getting out the paint. And some crayons for a wax resist first  because plain watercolour can be a bit boring too.

So while the pages were drying [cling film in between then so I could work on more than one spread and to add texture] – as I'd got the paints out – I sploshed some paint on paper as well.

As I’d got the crayons out I added some wax rubbings to highlight the texture on the book pages. And then I looked for the soluble pastels because I didn’t have the right colour of crayon.

Then I had to put all that lot away, while edging round the new paintings drying on the floor.

I decided I had to tackle the tottering heap of tear sheets, printouts, painted paper etc. - which led to spending the rest of the morning cutting and sticking. 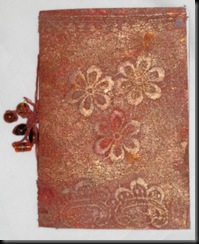 Then I decided to replace the pages in this, which had been a sort of diary, but of course it fizzled out after a few weeks. Two years ago. 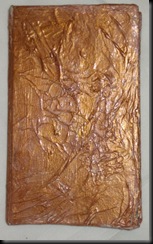 While I’d got the paper out I decided to put some pages in this, which once held the service record for a long dead Volvo.

Now it holds these. And lots of other bits of scrappy, odd shaped paper.

I sometimes use ring binders to hold embroidery samples so it might get some added, but at the moment both of them are ‘books whose purpose is waiting to be revealed’. 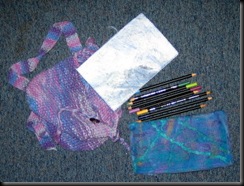 This one, however, has found its purpose – a drawing book for our small visitor. 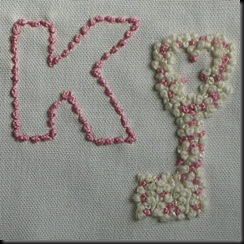 Here we have ‘K’ for a knotty key. ‘Knots’ were the only thing I could think of for ‘k’ apart from ‘knitting’ which doesn’t really work either.