that today has been a bit better than yesterday – although the weather has been worse.

We had an unexpected visit from Cheese Major – which is rare and always nice, but meant that nothing got done. I was going to finish off the purple book but I think it will have to wait until Friday now. 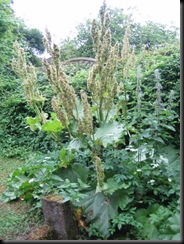 So no books or embroidery to show you – you will have to be content with this. That isn’t a grave stone in front of it, it is a concrete edging to what used to be the vegetable bed. When the snails got more of the veg than we did, I gave up growing veg!

No-one in the family likes rhubarb except me, so over the years several overt and covert attempts have been made to kill this plant, which was in the garden when we moved here. Cutting it down, digging it up, weed killer – you name it, my sons tried it.

The sons have moved on – but the rhubarb is still here, bigger than ever. Trouble is, it is not visible from the house and I forget about it until the rhubarb season is over.

Now my mind is running on rhubarb and ginger crumble …