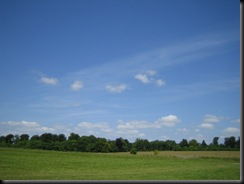 I had intended to stay in and tackle the tatty fleur-de-lyses – but when we woke up early and the sky looked like this – we decided to go out.

We wanted to catch the  exhibition by Caroline Sharp before it closed at the weekend – and we were glad we did. Beautiful contemplative pieces that made me think both of Andy Goldsworthy and Hilary Bower, whose exhibition was the last thing we went to at Walford.

I was particularly struck by one of these, although I don’t think these images do them justice. [This is a better one.]

Think of a giant [1.5 metres or more ] dandelion clock made of twigs. And the shadows it cast were beautiful too. [I have a thing about work that casts interesting shadows.]

Then we went on to Kingston Lacy, which is one of those places we have driven past saying ‘Must go there sometime’. Today its time had come.

We realised as we drove in that there was a sculpture trail, and we fully intended to visit that as well as the house – until we realised how much there w

as to see in the house. So we postponed the sculpture trail till another day and after visiting the house, we went and had a cream tea in the cafe instead. We enjoyed the scones and so did the chaffinch.

Not many embroideries in the house and strictly no photography, but we did find something

textile-related in the laundry outside where I sneaked a photo.   The one on the right looks like my 19th century model although mine doesn’t have Egyptian decals, unfortunately. 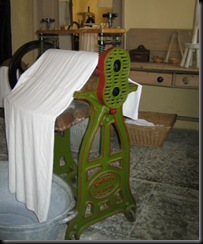 Opposite them was this. A bit more robust than the one my aunt used to have, but I think she did rather less laundry.

So one of these two images is my daily photo – I can’t choose between them.

And finally – the arashi dyeing. Low contrast as I expected, but quite interesting. I'm thinking about re-arashi-ing them and  then discharging to get a little more contrast – I’ll see what I feel like over the weekend. 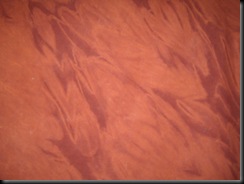