I usually find it possible to contain my enthusiasm

for whimsy. With a few exceptions, I have little interest in fairies, and ‘faeries’ make my toes curl. [As do ‘fayres’ and shoppes’. The spell checker doesn’t like them either.]

So you might have thought that I would resist an invitation to an exhibition called ‘The truth about faeries’.

But they promised Cecily Mary Barker. Her work is one of the exceptions to my dislike of fairies, probably because I was brought up on her books.

The few examples of her work in the exhibition were lovely. As the Wiki article points out, her flower illustrations are botanically accurate and the fairies are portraits of real children. A little idealised, maybe, but delightful.

There were some other things that I liked – for example, many of the Victorian illustrations on show. But in general it just wasn't my sort of thing. And I have very severe reservations about nudes of pre-pubescent girls. I only spotted a couple of them, but that was two too many.

Maybe I’m being narrow-minded, but I also have reservations about marketing aimed at children [a competition on the opening day for the best dressed fairy under 11] for an exhibition which has a section labelled ‘Not suitable for children’.

I suspect children wouldn’t enjoy a lot of it anyway – and most of the pictures were hung too high on the wall for them to see easily.

I sometimes think that I seem to enthuse about everything we visit – but I'm not enthusing this time. You would probably enjoy the exhibition if you do like fairies and fantasy – but perhaps check it out before you take the kids!

After a while we escaped from the fairy galleries for the human ones – but were disappointed that very little of Southampton’s famed collection of 20th and 21st century art was on display. If you visited at the moment you would never imagine they had one of the best collections outside London. However, there was a lovely little Vuillard called ‘Two People’ which I would happily have popped into my bag, given half a chance … 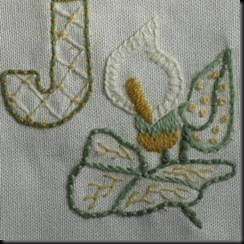 On to today’s photo  - ‘J’ for a Jacobean Jack-in-the –Pulpit. I had fun with this one – although I wouldn’t like to do a large piece of proper Jacobean / crewel work!