I haven't fallen off the planet -

I’ve been on holiday. [This is a long post because my fried A. said she was looking forward to reading what I wrote – so blame her if you get bored!]

The co-grandparents, R&S, had told us about the cottage in the Yorkshire Dales they have been to se 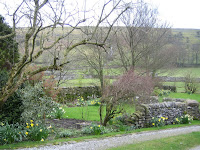 veral times. Wensleydale has had a very busy time governing recently so when the chance to go there came up at short notice we leapt at it.

When we got there we understood why R&S [and Skye, their amazing footballing border Collie] love it so much – this is [part of] the view from the front door. The cottage is in a village of 35 houses up a si 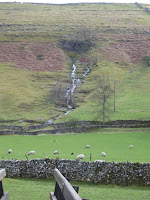 This is the water supply for the cottage - the water is filtered and irradiated and perfectly safe although it is the colour of over-watered Scotch. 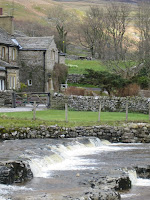 ge over the river which is at the foot of the garden. From the opposite bank you can see the cottage at the right hand end of this building.

Lovely as it was, we did leave the village on most days. We went to Hawes but it was full of retired holidaymakers [!] so we passed up the Wensleydale Cheese Experience – after all, I have that all the time.
We went to Bolton Castle instead, which was much quieter. It is one of the many castles Mary Queen of Scots was imprisoned in - an embroiderer, so of course she appears in my magnum opus, the History of British Embroidery.
We followed a school party in but there were only a minibus full and they were better disciplined than the coach parties in Hawes - they didn't mill all over the place or suddenly stop in front of you.
I didn’t explore the castle fully – I don’t like heights or spiral staircases. I do like windows and there were lots of interesting ones, so I photographe 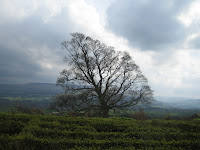 d them while Wensleydale climbed higher. Then we had a cup of tea in front of the log fire in the tea room, and took some photos from the garden of the thunder storm approaching down the dale. 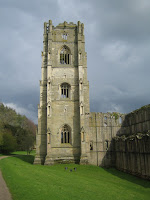 We also went to Fountains Abbey – in fact we liked it so much we went twice. We are National Trust members [it's obligatory for retired teachers, you know] so we got in free – and of course, like most Trust properties it has a very good tea shop. Fruit cake with Black Sheep Ale, anyone?
I was fascinated by the contrast between the ruins of the Abbey and the 19th century church. by William Burges. in the grounds. The church looks fairly plain on the outside but the inside is a little more elaborate. 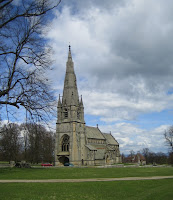 I think you either love or hate Gothic Revival – I love the intensity of colour and pattern on every surface. Unfortunately I neglected to take a photo of the organ housing made to look like a medieval house, b 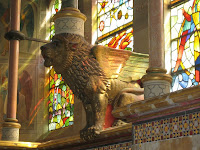 ut this is the Lion of Judah. The sun was shining weakly - it must look magnificent with strong sunlight through those windows. 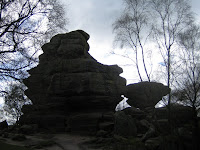 On the way back from the Abbey we went to Brimham Rocks. Wensleydale remembers going there as a little boy and having a wonderful time climbing around. We were a little more restrained this time but I did take lots of photos. They are natural formations although some look as though they have been carved. This is just a sample - they cover several acres [or hectares if you prefer].
We also visited Skipton and bought cheese in the market - mostly Wensleydale, naturally, but also some called Bowland, which is the local area my grandmother was born. We also visited Skipton Castle -another Mary Queen of Scots connection, and more windows.

I bought some postcards of portraits of former owners of the castle to go in the magnum opus. [You thought I’d finished that, didn’t you?] These were 16th and 17th century residents and their clothing was embroidered, so I had to have them. Plus they were only 20p a time. I also bought a book on the Bayeux Tapestry to add to the three I have already …

We had a very relaxing time but it was good to get home and Quality Control was glad to see us back. [She did have a cat sitter while we were away, my first DIL Ginge who used to own her - thanks, Ginge!] [No, she wasn't christened Ginge.]
We were struck that in Yorkshire the daffodils are still out and, as you can see from the photos, the trees are only just beginning to come into leaf. At home the trees are fully out and our apple trees are in blossom. The weather is pretty much the same though – sunshine interspersed with gloom and occasional rain.
Posted by Cda00uk at 12:59

Hmmm what is it about Fountains Abbey and teachers? I went there as a teenager with my parents (one them a teacher) and happened to spot one of my schools (male) history teachers with erm... a recent 6th former from the same school. Eeeew!
Glad to have you back down south - your holiday views look amazing.