I missed last week’s C&G session on marbling because I was in Yorkshire, so I spent yesterday catching up. I had marbled before so I had a vague idea what I was doing – and of course I had most of the materials somewhere – I just had to find them.

While I was waiting for the medium to mature I did some shaving foam marbling – not sure it was in the class but it’s fun. I usually use inks but this time I decided to try some left over silk paints, and found that they worked well - they seemed to go on producing prints for a long time. Unfortunately I didn’t have a wide range of colours but some of the prints are quite effective. The pale one at the top is on crystal organza.

Once the marbling medium had set I tried that, this time using the ‘right’ paint. With these I usually only got one print – sometimes there was a bit of paint left on the surface which gave a paler second print. The circular one is on a cheapo paper doyley from the Pound Shop. 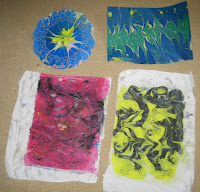 You get more control with ‘proper’ marbling but as I’m not very good at it that isn’t a major advantage! The big problem is that these are taking for ever to dry, perhaps because it’s quite humid in the conservatory where they are.

We are apparently going to be using these in class on Thursday which is why I wanted to get them done.

Today I have made the full stage mock up for the 3D piece. I had hoped to get more done but I’ve run out of drying space so the mock up is drying on my work table, which is preventing me from starting waxing the silk for the real piece. It’s not procrastination, honest!
Posted by Cda00uk at 15:41