Another pot in the exhibition had what looked like gauze bandage wrapped round it, under the glaze. [I think – I know nothing about ceramics.] So I have been playing around with texture, including bandages. 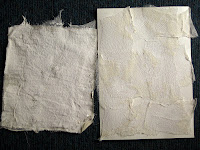 These are gauze bandage and gesso on paper and calico 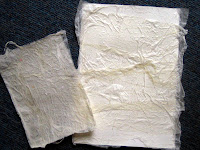 and these are the ubiquitous creative embroiderer’s standby– tissue paper and PVA. 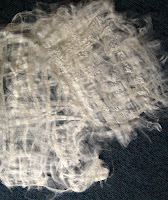 Silk paper, some with bobbles in it, because another of the pots had acne – not literally, but there is a medical theme to Van Essen’s work in this exhibition. 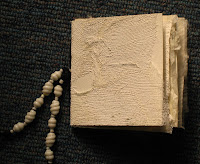 And of course the texture pieces ended up being made into a book – which demonstrates that even the ugliest beads have their place. The cover is the watercolour paper/bandage/gesso combination which is rigid but can be sewn - might make interesting vessels..

I love the contrast here between the silk paper and the tissue.
Van Essen's pots have inspired so many ideas that I am thinking of starting a themed sketchbook to explore them, inspired by a denim covered book in Kay Greenlees' ‘Creating Sketchbooks for Embroiderers and Textile Artists’.
On re-reading Greenlees, she implies that painting your pages and decorating the cover m

ay be procrastination – ‘The contents are more important than the cover’. Guilty as charged – but I do find some work looks better on a coloured background – for example this Gormley inspired spread, which I am rather pleased with. If I were to translate this into stitch – and the silhouette is fabric, albeit covered in texture gel and paint – I would want to incorporate the serendipitous effect of the colour I sloshed on fairly randomly. Of course a real artist would have planned it! 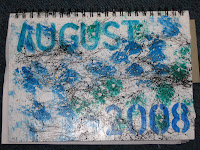 And there is a reason why the cover looks like this! [Not, I'm not planning on doing one a month.] I hoped that if the cover looked a mess I’d be less hung up about what went inside. Only partly successful, I’m afraid. I think this a result of doing C&G, particularly ‘Creative Sketchbooks’. In those courses design work is a product more than a process, which will be evaluated by the assessor. In ‘real art’ the sketchbook is part of the process of producing the design and you don’t have to show it to anyone. But I am coming round to the idea that making books is what I do so I should stop farting around and start thinking of ways to combine books and stitch. If Frances Pickering can do it ...
http://www.stitchhost.co.uk/frannyp/

In her class on Studio Journals – which I have failed completely to do justice to - Sharon Boggon talks about the studio journal [so much more encouraging than ‘sketchbook’] as a compost heap – you throw everything in it and hope something fertile emerges. Trouble is, I’m having so much fun with my compost heap that not much stitch related is emerging! 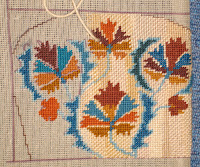 One piece that did is this much more traditional WIP. This is the flap of the Suzani inspired bag, which is working up quicker than anticipated. I think this is because it has a lot of small motifs which work up quickly and make me feel I am making progress – and the random background grows quickly, too, because it is more interesting than if it was all in the same shade.

I will go quiet over the weekend as Babybel and her parents are coming to celebrate her dad’s birthday. Just hope he doesn’t expect to be the centre of attention … I have made him a chocolate Guiness cake, but that will have to do!
Posted by Cda00uk at 18:01

Celia, Your books are gorgeous. I love books too and I have just done a week summer school with Heather Power at Missenden Abbey and made 8 books and two matching boxes. I also want to combine stitch with my books. I am finding your blog truly inspiration and it makes me want to start my blog up again, but thats still on hold until I finish my course. Best wishes. Lesley

Its lovely to see all your experimentation.I think some of them are pieces in their own right.