as someone once wrote.

Yesterday started badly but got better – and today was good all the time.

We usually look after Babybel on Thursday mornings, before taking her to nursery in the afternoon. But she was ill on Wednesday morning [probably norovirus] and although she was over the worst by yesterday, it was clear when she woke up that she wasn’t perfectly recovered. Let’s just say quiet and passive – two words not usually associated with Babybel.

So she spent the morning on the sofa, watching CBeebies, and drawing. However she ate a good lunch and was sufficiently  recovered in the afternoon to consent to a little duck feeding at Whitchurch Silk Mill. And a bit of fresh air made her well enough to go round the mill, inspect the machinery, which fascinates her, and sample crisps and orange juice in the cafe.

In the cafe we were privileged to share the moment when she discovered that rainbows don’t just stay in the sky – sometimes they come down to earth.

The sunlight was refracted through the edge of a glass display cabinet [the one with the art bras in it] and if you stood in just the right place it shone on your hands, your clothes, or – if you pulled your T-shirt up to experiment - your tummy. Then if you persuaded gran to stand in just the right place, she got a green nose and a rainbow in her hair. We had ten minutes of delight and magic, which the grown-ups will never forget.

After all this, we decided she was better – especially as she talked non-stop all the way home …

Today we decided to revisit a couple of exhibitions before they closed – the Pat Hodson show at Walford Mill [and the craft materials sale there as well] and, in the dusk, Bruce Munro’s work at Salisbury Cathedral.

Both were as good as before, but it was surprising how different the Munro exhibition was – not just because the lights show so much more in the dark, but because it was very busy, and that changed the feel of it. The music, which was so important for us when we went before, was almost lost at times in the sound of voices and feet – which meant that we couldn’t sit and watch the way the lights responded to the music. I'm not sorry we went tonight – but I am very glad we went in the daytime too, because I think I got a great deal more from the exhibition by seeing it in daytime and dusk. 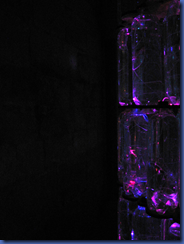 I remembered my camera this time. but it struggled with the conditions. However, unlike many of the visitors, I did remember to turn the flash off – which meant ht majority of my images are like this - 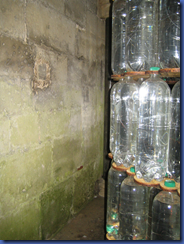 and this   - not quite as magical.