Necessity is the mother of invention.

When I finished the not-angel, I thought that the head and neck needed work – and in the chilly fastness of an insomniac night – I thought ‘Why bother having a separate head at all?’

Which led to the idea of a tall cone.

So I made an armature from six junk CDs and some rolled up magazine pages, measured it, drew a pattern. tried the pattern on the armature, cursed – and made a bit of liberated patchwork for the fabric.

I wasn’t sure I really liked the patchwork [which means of course that really, I didn’t like it] but I machine quilted it to a piece of wool felt and stuck it in the washing machine to shrink.

Which it did – in fact it shrank so much it was too narrow fro the intended purpose - which solved the problem.

I think it will make a book cover, one day – or I might try cutting it up and  - er, no, make that a book cover. 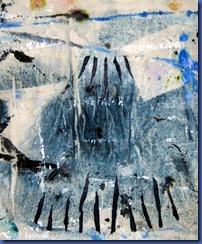 Plan B started with making another, better pattern – but while I was fossicking in the cupboard for the Vilene to make it, I came across one of those bits of fabric you keep because you just know it will be useful one day. Well, I do – a sane person probably wouldn’t keep something like this - a bit of calico I’d used as a drop cloth when I was painting something with blue Quink [judging by the colour] – although there are several varieties of paint on there as well.

I forgot to photograph it before I got to work on it, so just imagine it without the embroidery, OK? The radial blue bits are recycled from the 3D drawers – the stuff I was going to cover them with before I decided not to. 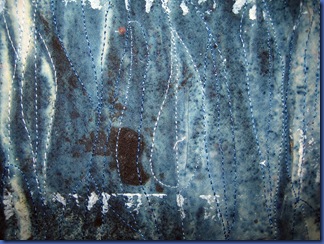 And this is the machine embroidery I don’t do.

I seem to have a thing about leaves – I saw leaves in the blotches, so I outlined them. I will probably add some hand embroidery before I assemble her – I think she’s a dryad – or a naiad – not sure what the difference is [or even how to spell them].

My recent computer games have involved taking an image I made in Sumopaint - and playing with it in PostworkShop [I did splash out and buy the artists edition, – even more filters! - but I managed to find a discount download so it cost me a bit less]. 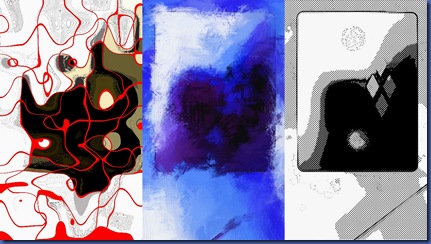 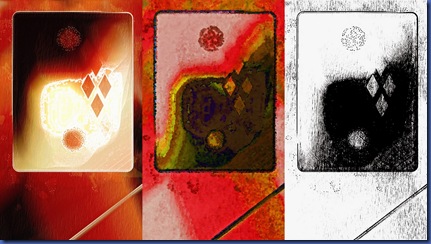 t for fun – but others are definitely embroiderable.

In the helpful help pages I’ve just reached  combining filters – the top image was made in Sumo, the bottom has PostworkShop’s ‘Speed Painting’ and ‘Dark Magic’ filters added – definitely more interesting. [Adding them the other way round was much more boring – flat and drab.] One of the advantages of the paid-for version is that you can save combinations you like, so I’ve saved that one.

You will escape being bored with my computer excesses tomorrow, though, as tonight is Danish detective drama night and all I can do when that is on is knit, as it needs intense reading.