Progress has been made…

on the PCs/PMS, though I’m not really sure what constitutes either. At the moment I’m working on the assumption that if it’s 2D – or 2.5D. like a book mock up – it goes in the sketchbook, and if it’s 3D and/or textile/stitch, it’s a personal cloth – or a sample for a personal cloth. I have come to the conclusion that I should just make stuff for the PCs, and whether it is a PC or a sample will ultimately depend on how much stuff I manage to make [The target is 10-15.]

On that calculation – these may or may not be PCs, but they are definitely not for the sketch book: 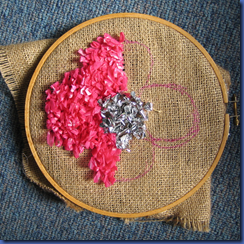 Daisy because she’s a textile, and lumpy

and Cadel, Andy and Frank because they’re 3D [and look as if they are on a podium] 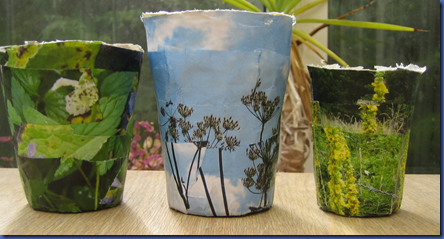 I’ve noticed that a major constituent of litter is fast food detritus, so I decided to have a go at making my own ‘disposable’ cups using papier mache and photographs of the things which litter despoils. These will eventually be photographed in situ, but they are still a bit sticky. The rims need a bit of thought, but in general I’m pleased with them – especially Cadel.

I don’t like Daisy as much as her brother Tommy, the blue litter beast, so she may end up as a sample, if I manage to make enough pieces. Mind you, the quality of workmanship wasn’t improved by working on her while watching the TDF time trial – not normally my favourite part, but this one was almost as exciting as the Alpine stages. And now the right man has won [sorry Schleckies], all I’ve got to worry about is Mark Cavendish falling off in the Champs Elysees. [Does that really mean Elysian fields? I’ve never really thought about it before.]

I’m so productive, I’ve even done a bit of drawing. Sian Martin has been running a summer sketchbook project on her blog. As I already had a collaged, stained sketchbook like she suggests, I decided to join in. 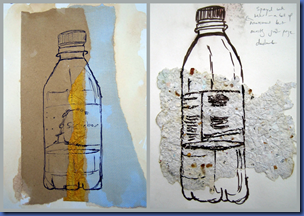 I’m a bit behind, but at least I’ve started, and I hope to do more tomorrow. Not the organic forms Sian recommends, but more potential litter, which makes it a contribution to the PMS, and kills two birds with one stone.

Speaking of birds, there are either more pigeons this year or they are all following me around. Paranoid? Moi?