A riddle wrapped in a mystery inside an enigma.

I mentioned yesterday that I was overdyeing some nasty pieces of hand dye, in an attempt to make them less nasty. All of them, together, at the same time. You may not believe this when you see how they came out.

I used some Dylon ‘Jeans Blue’ machine dye because:

My theory was that anything which was mostly white would end up blue – and that’s what happened.

These were white with purple or blue splotches on them – so now I've got blue with darker purple and blue splotches. Not brilliant, but better than they were – they are actually a bit darker than in the photo.

The second group date from my Kandinsky period, when I was dyeing saturated multi-colour pieces to make my version of this for City and Guilds. I had a lot of fabric left over and while it looked OK in small pieces, overall it was a bit too bright. Not to mention clashing. 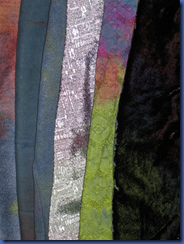 The one on the right is silk velvet which I didn't want to bin if I could help it, which is why I decided to try the overdyeing.

This photo is reasonably accurate,unlike the others. Reasonably accurate apart from the one in the middle which does not have a big dark blob on it. [It is supposedly silk, from a charity shop blouse – but given how little dye it’s taken, I suspect there’s more than a little polyester in there as well.]

The silk velvet is much more interesting than it looks here – a deep green with undertones of other colours. Yes, green. No, it wasn’t mostly yellow before.

The final group were either:

My assumption, based on colour theory, was that if I overdyed orangey red or red with blue, I'd get purple – or at the worst, brown.

Definitely not green. [They are a lot darker and greener than in the photo.] 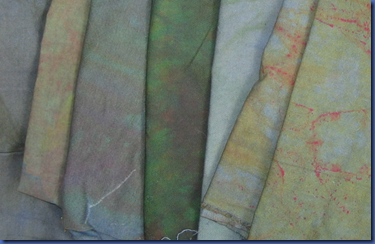 The one in the middle is about right, the others are completely misleading – like a cross between how they really look now and how they looked before I dyed them.

But I’d rather have green than brown, so I’m not unhappy, just perplexed – about the failure of colour theory - presumably this particular dye blend has a lot of green in it - and why my camera wants to take pictures of something that doesn’t exist.

This is good to know. I did some silk twill with royal blue which came out preiwinkle because I Never weigh the fabric. but it is gorgeous. So, I was going to try the blue jeans colour I have on some silk noil, but that would have been distraction from what I NEED to do.
However, now that you have shown it may turn out green, I will wait and get more royal blue.

not that I don't like green, but I don't need 6 metres of it. I can do more with blue of whatever hue.
Sandy