How to make something simple very complicated

I have been reading the late Julia Caprera's new book, 'Exploring Colour' and was inspired to do a colour study. So did I go out and buy a small sketchbook? Of course not - that would be far too simple ...
I thought I had a dark blue box I could use for a cover, so I chose blue for the study. Using the box seemed simpler than making a cover from scratch, and 'box books' have lots of room for adding stuff. If I could make two Mulled Wine box books in the middle of the night I could make this one almost equally quickly, even if it was bigger.
First complication - I decided to pre-paint some pages rather than colouring them in situ, which can get messy, in my hands at least. So I used crayons and paintsticks and acrylics as resists on big sheets of paper, sloshed over Brusho and Koh-i-Noor and some pale glittery paint I got from the Works, and left them to dry while I looked for the cover.
Second complication. The box is dark green, not blue.
So rather than paint some green papers I decided to make a cover. I didn't think the blue card I had would be tough enough so it had to be fabric - and I found a perfect remnant of thick dark denim. 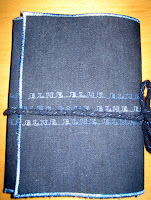 Fourth complication - I can't just leave the cover plain. I'm an embroiderer for goodness sake! But I really couldn't face doing anything elaborate - the embroidery is meant to be on the inside, not the outside. Time to explore the alphabets on the Bernina - and fortunately I have lots of blue variegated thread. So, in case I forget, the cover says BLUE BLUE BLUE repeatedly. It isn't back to front/upside down, by the way - the cover wraps over to allow for expansion when I start putting stuff inside.
Fifth complication - thick as the denim is, it needed to be stiffer . And I have decided I don't really like craft Vilene. Fortunately I found another offcut of some thick mystery fabric which was big enough. Bond the two pieces together and zigzag round the edges - easy! And I found a suitable twisted cord for a tie, no need to make another one!
Now all I had to do was put in the pages ...
I found a picture of a long stitch binding I liked in EK Smith's 'How to

Make Books', used her clever technique involving graph paper to punch holes in the cover and pages and started to sew. And 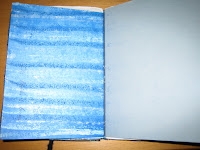 realised - sixth complication - that I hadn't checked how to do it so I hadn't punched enough holes. I needed 6 in each signature, not 4. Unpicked, punched more holes. [It's not easy to do this retrospectively.]
Started sewing again - and had problems with almost every signature. Getting signatures upside down, sewing the tying cord into the pages, knots, pages out of place - everything that could go wrong did.
But - it is finished - and I like it. It feels wonderful in the hand, an

d once the smell of paintsticks wears off it will be perfect. And I don't have to put something on every one of its 190+ pages, do I?
Posted by Cda00uk at 18:41

This sounds just like a day in my house : well worth all that effort though it looks great,but 190 pages, phew!