Am I the only person in the UK …

who is sorry to get an extra day’s holiday tomorrow? I was quite disappointed when someone phoned from College to say it would be closed tomorrow because of the snow.

I am also quite relieved, because it means I don’t have to decide in the morning whether to try to get there and then spend the day either:

And if the snow holds I can do some more snow dyeing. 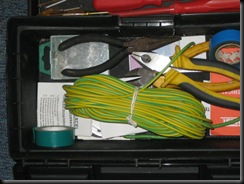 Just to prove how sad I am – I got very excited when I spotted this in Wensleydale’s tool box. Not the blue and green insulation tape – although that’s quite interesting too – but the green and yellow stripy stuff, which is sleeving for wire.  I’m thinking couching or wrapping  – or beads, as it’s hollow.

Unfortunately he’s only got the one colour – but there is quite a lot of it, which he has nobly agreed to share.

As it was another morning on which we got up early, I got quite a lot done. [Really early, as I had a dental appointment at 9. Network Rail has, in its wisdom, decided to close one of the only two routes into Winchester from the south, so all that traffic is now driving past our front door. Very very slowly. Which meant allowing even longer to drive the few miles to the city centre than we normally do. ] 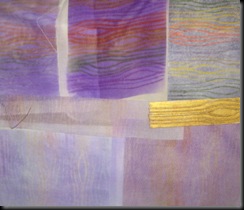 So after I got back from a cleaning and a telling off, I did  some experimentation with transfer dyes. I made a rubbing of the string stamp with transfer crayons and then covered the whole thing with transfer paint. Purple transfer paint, as you can see. Top right is the paper after I’d got all these prints from it. Anticlockwise from there the fabrics are a poly sheer, some poly cotton, a long thin piece of tapestry canvas, the felt that wouldn’t die –er – dye, and some more canvas.

The patterning is quite faint on some pieces, but they will make good backgrounds - for something yet to be decided. 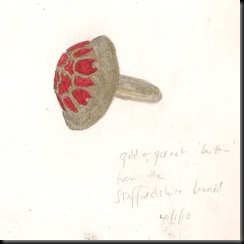 I also managed to finish this – which looked better before I coloured it. Turns out I misspoke in saying it came from a shield, the British Museum think it came from a sword – as I’m sure you all knew. 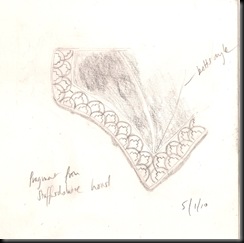 And I continued my exploration of Saxon relics with this. No idea what it is, the booklet didn’t say. It looks like gold inlaid into something, possibly leather or another metal. But that little blackwork-like decoration is beautifully done – much more precisely than in my drawing … It looks like the corner of a waistcoat, although I’m sure that it isn’t. 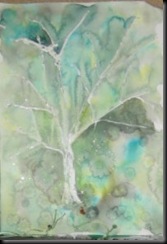 Guess what – another C&G tree! [Nearly at the end now]. This was ‘drawn’ with hot glue, then given a water colour wash [after it had cooled down, obviously]. I like drawing with hot glue – told you I was weird.

Speaking of drawing – have a look at Julia Griffiths Jones’ work. I think it is wonderful – I want to rush off to Wales to look at it. After it’s stopped snowing, obviously.

well done you have had a productive day - much more so than me as it has snowed all day and I have just sat watching it!