The veg must get through …

Congratulations to Riverford Organics, who delivered our box of veg today, despite the weather. OK, it was a day late, but all the more welcome for that. I see leek and potato soup in my future.

The bin men, on the other hand, didn’t make it, although we keep seeing their trucks.

This is the result of the snow dye

ing. Unfortunately the colours are rather murky  – and the French Navy dominated everything else. The good news is that I managed to dye some felt -  in the middle of the image at the bottom.

Most ‘wool’ felt is a blend of viscose and wool, and viscose will dye with Procion, so I knew it ought to work.

Incidentally, three of those bundles of thread were washed in a mesh bag ‘to stop them tangling’ – and one wasn’t. Can you tell which is which? No – neither can I. 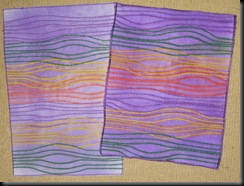 I liked yesterday’s embroidery so much I did another one. The one on the left is on polycotton – and it was a later transfer print, which is why it is paler. I didn’t think it would work out as well, but I like the more subtle look. I'm thinking book covers or vessels.

And it’s official – I’ve had enough snow – although we seem to be stuck with it for a while. Thanks to Cheese Minor for alerting me to this amazing image. 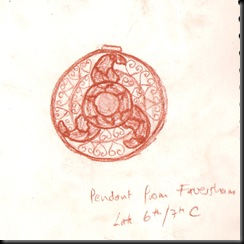 So I did a bit of drawing. I decided it was time to try something I couldn’t rub out  - although that didn’t stop me trying. It was a bit frustrating - is it characteristic of  Conte pencils to break every 5 minutes and refuse to be sharpened? And I really agonised over those bits of filigree in the background, until I realised that the original craftsperson hadn’t got it right either – there are different numbers of hearts in each space and in one place s/he’s filled in an awkward sized gap with a little curly ‘S’. Quite reassuring, really …

the fabrics are really delicate and rather spring like which will inspire you when all this whit stuff goes away!!!