Snow dyeing, embroidery and a walk in the sunshine. 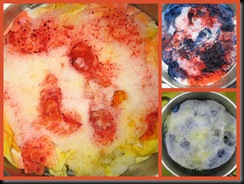 Not tutti-frutti sorbet, but some rather mucky snow –which melted pretty quickly despite sub-zero temperatures outside.

This is even more experimental than usual as I used some elderly Dylon cold dyes – heaven only knows why I had ‘Sunshine Yellow’, ‘Mandarin’, and ‘French Blue’ but that’s what they were and I decided it was time to use them up. Fingers crossed that they are not too old. They are batching by the boiler now and will be rinsed and washed tomorrow.

I worked on this last night – blah interim version on the left, ‘finished’ version on the right. I decided to use some in-your-face, why-did-I-ever-buy that? holographic gold thread and work FME squiggles in the jar-opener shape. And then I added some zigzag stars, with purl tails. Not sure it works but it’s ‘only a sample’ and it is no longer blah. 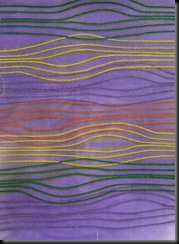 And today I did this with  the transfer dyed sheer and felt.  You can’t really see the felt under the sheer but I think it helps to intensify the colours. The stitch is a narrow satin stitch – it is a bit irregular, due partly to having a very loose top tension and partly to a dirty machine – things got better after I cleaned it. However I quite like the blips.

It is now in the washing machine shrinking – I hope. *

I only started working with these colours because they were, more or less, the colours of the original collage – but I have come to like them. I suppose they are a sort of split complementary, although I’m open to correction on colour theory! 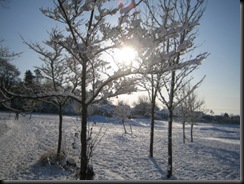 In between all this textile activity we had a short but pleasant walk down the road to the golf course – although it was more of a tobogganing and snowball fighting course this morning.

This is the last of my daily picture posts – and the last trees in the book. Cut up magazine photos, inspired by Mondrian's trees.

* The purple piece hasn’t shrunk – which proves fairly conclusively that the felt that wouldn’t dye wouldn’t, because it is not viscose-wool felt. Mmm – I do have rather a lot of it.

It will transfer dye though – and I suppose I could always use it for padding a print table, which is what I bought it for originally …