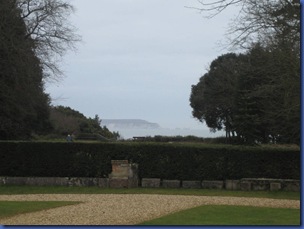 Yesterday we decided it was time to revisit Highcliffe Castle, so we pottered down to Dorset, had a look at the art exhibitions that were on [some interesting ideas], spent some money in the shop [things for Babybel – 4,, things for Gran and Granddad – 0] and had a good lunch in the excellent cafe. 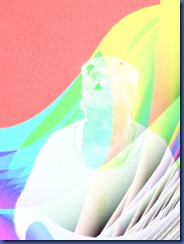 Then we came home and I played with GIMP, which, I’ve concluded, has much more interesting filters than PSE. This is one called Qbist, layered over one of the photos from college. 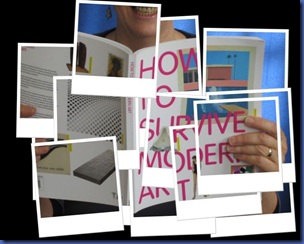 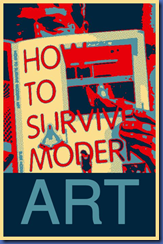 and Lunapic – this is the Obama style filter, you’ll be amazed to hear.

Then I began to have to fight with BT Total Broadband and/or Google Chrome to  get, and keep an internet connection, so I gave up, turned everything off, and watched a very good programme on Indian textiles on the telly.

Today, Wensleydale went to help Babybel’s Daddy do DIY - [and Babybel, of course, who has her own tool kit]. I stayed at home and kept busy. I:

* Aforementioned parcel. What could be in it? [Not the cup, that’s there to show the size.] 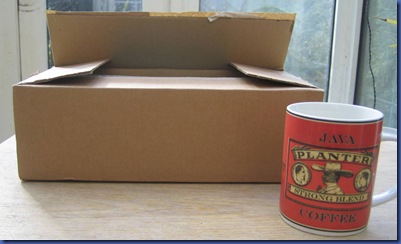 A lot of packaging, 4 catalogues, a receipt and a little white box – overkill packaging, perhaps? 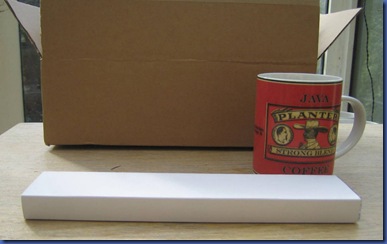 The little white box contained this, a somewhat more expensive replacement for my £5 charity shop watch, which finally gave up the ghost last week. As the local charity shops don’t seem to sell cheap watches any more, I decided I needed some colour in my life and gave myself another early birthday present. It is rather fun 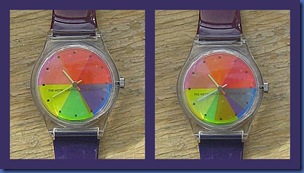 Tomorrow is the actual day of my eleventy third birthday, so we are off for a family outing to look at model trains. Not that I am specially interested in model trains  but I know a young lady who is, and watching her watching them will be lots of fun.