What would you do …

if you had to rest your big toe?  As in RICE – Rest, Ice, Compression, Elevation?

Don’t laugh, it is very painful. I don’t know what I've done to it – Mrs Cheddar suggested it was gout, but when I Googled it the symptoms aren’t quite the same. It started on Tuesday night, but was not too bad on Wednesday – or I wouldn’t have gone out, but on Wednesday night it was agony, and I could barely walk on Thursday, hence the RICE. It has been a bit better today, but I am still trying to keep off my feet.

Using the sewing machine is out, unless I change the habit of a life time, and operate the pedal with my left foot, so I made a couple of books – what else would I do? Most of it done sitting down at my desk with an ice pack under my foot – there’s one there now, and it’s bliss. 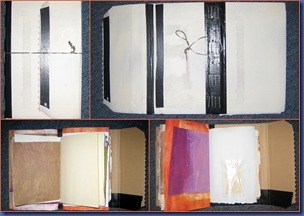 This book mailer got a little damaged when Babybel helped her Granddad open it, so it is patched with tape. I was trying to make it look like a bar code, but ran out of tape, and ended up with a mess. The pages are an eclectic mess mixture of paper, including some of those I painted on Wednesday – whatever was easily to hand, really. The stitching is Keith Smith’s ‘Triple Dash’ – but there are four signatures, so i suppose it is ‘Quadruple Dash’. 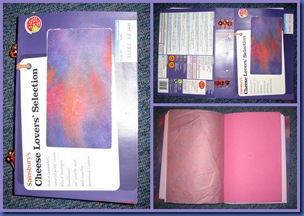 This is, as you can see, a Sainsbury’s cheese box from Christmas – I kept it because I liked the hole in the top [now front].

I Bondawebbed the box to a bit of experimental dyeing, cutting the Bondaweb away from the hole. These pages were anything I could find in the paper drawer which seemed to go.  The binding is Ailsa Golden’s ‘Bunched Stitches’ – although my bunches are beads. Although I find beads on the spine are a bit of a nuisance because they stop the book lying flat, it seemed a good use for these spotty orange ones.

Of course the other thing I can do in my enforced rest is play with the computer – although BT is doing its best to restrict me, by b****ring around with broadband. We hope this is part of their promise to provide us soon [for a fee] with their whizzy new faster version – but this seems to involve cutting us off altogether for long periods of time, or delivering a v-e-r-y  s-l-o-w version when we’ve got one at all. 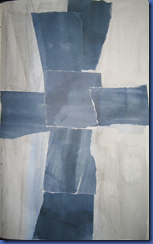 Of course, as soon as I pick up the phone to ring BT – it comes back on again. That has happened three times now, which seems too much of a coincidence. [Paranoid? Me?]

Good job I’ve got some downloaded programs to play with, like PostworkShop.

This is a collage so boring I didn’t bother showing it to you when I made it – I was experimenting with a cruciform design as suggested in several design books. A good test for the program, I thought. 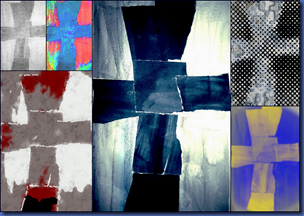 These were all made by applying a single ‘style’ to the original – apart from the blue and yellow one, which like this lot - 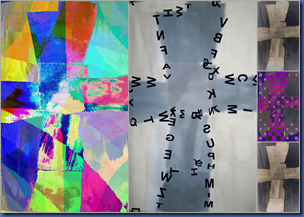 The one with letters came from using a brush called ‘Letters’ at its largest setting, in one of the Sketch styles – the sketch was very sketchy so the letters are sparsely scattered. You can choose the letters the program uses so you could make it say something, although I think you’d end up with anagrams...

Definite improvements, some of them. I think PWS passed the test.