We had an extra Babybel day yesterday, as Mrs Cheddar had an outbreak of builders. We had an outbreak of BT engineers - well, one, who took his boots off at the door – is this standard BT practice? Babybel took the opportunity to show off by sliding down the back of the sofa while the poor man tried to connect us to Infinity. 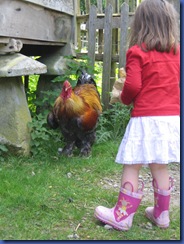 Since she’s been going to nursery in the afternoons, we haven’t had a chance to take Babybel  out for more than dog walks, so we grabbed the chance of an afternoon outing. And on a beautiful April day – where better than Manor Farm? Babybel was delighted to renew her acquaintance with Lily Cow and Rambo the world’s Hampshire’s biggest cockerel.  I realised how much she's grown since the last time we went, because she is now taller than he is.

Today W. and I went on a grown-up outing, to the Ramster Embroidery Exhibition. 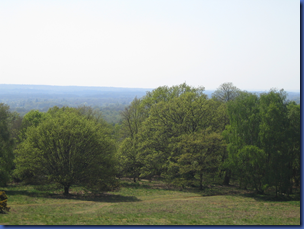 We stopped off at Puttenham Common for a picnic lunch and had the place almost to ourselves, in temperatures in the 20s, under a clear blue sky – that’s a heat haze in the photo. If we get weather as good in July I’ll be amazed.

Then on to Ramster. It’s a few years since our previous visit, when I was very impressed with what I saw. I'm afraid I can’t say the same about this year – I’m not sure whether that’s me, or the quality of what was on show, but Wensleydale felt the same.

There were some standout pieces, including Wendy Dolan's subtle quilted works based on maps, [image which doesn't do them justice here], and Susan MacArthur’s nudes, which to me are perfect demonstrations of how textiles can do things that straightforward painting can’t.

I’m glad to say that I also admired my colleague Consuelo Simpson's work before I realised whose it was!

Thinking about the pieces I liked – and the pieces I didn’t – I came to the conclusion that my preference is for pieces with a restricted palette, in which stitch plays a subtle but important role – which is, maybe, the direction my own work has been heading. [Subtle? Moi?]Too many of the pieces on view today seemed to adhere to the principle of ‘any colour as long as it’s bright’ – including  a very famous name whose use of colour I used to admire…

And although the tea and Brownies in the Tea House were good, the service was slow - so I don’t think we’ll be going back.