After college on Wednesday, and a helpful tutorial, I have a much better idea where I’m going with the current college work. One of my concerns was that we had been asked to research a topic without any guideline about the essay we would be writing using the products of our research – which is far too open-ended for me. And the more I looked at artist’s books, the more things to research I found – it was getting a bit overwhelming.

But I now have an idea of a title – sort of – which will help to focus subsequent research – sort of. ‘European artist’s books from Blake to Cheshire Cheese, with reference to the role of technology in the development of the genre.’ Or words to that effect. The Cheshire bit is because I was encouraged to make some books and discuss them in the essay. The next module is ‘personal cloths’ – though, as it turns out, cloths can be books. Or books can be cloths. Oddly, I find that idea quite scary – it means I will have to stop faffing around making samples and start making something with content!

I couldn’t get started yesterday because it was was Babybel and Gym day. Some art did take 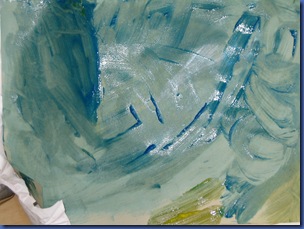 place, but little of it was mine.

Some art on paper ‘The sea, a beach, and a road’. Reminds me a bit of Alfred Wallis <g>. 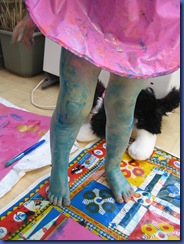 And some of it not on paper. I know Picasso talked about trying to revert to painting like a child, but I doubt he ever painted his legs blue…

Fortunately I had already planned to put her in the bath after the painting. 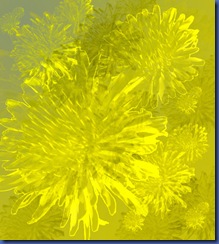 I did manage a bit of faffing around with Photoshop Elements, including some disembodied dandelions, but that was all.

So today I was going to start thinking seriously about the essay – the first draft is due in in June, so there’s not much time.

Of course not. And not because I was watching that over-hyped wedding. [Bah! Humbug!]

First I did a bit of ironing – I do do boring things like that occasionally. Especially when I'm procrastinating. 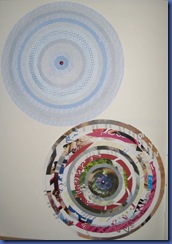 all the stuff I’ve collected.

Then while I was putting stuff in the file, I thought ‘don’t file that, make it’. So I did.

A couple of volvelles, inspired by a picture of a shield. One from junk mail, one from the backs of envelopes. 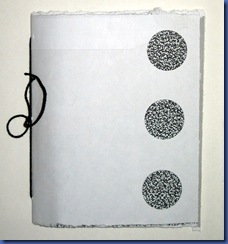 More playing around with the backs of envelopes, 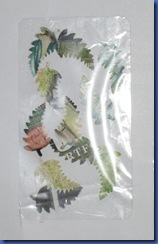 and the front of an envelope, with more junk mail 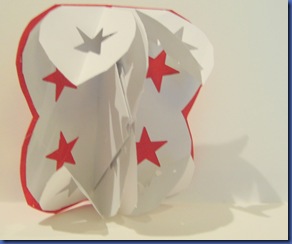 and another envelope and a scrap of hand made paper. It’s based on the Turkish Map fold, but I changed it by folding the base in, curving the edges, and attacking it with a star punch. I'm sure someone has added extra folds to this structure before, but I have never seen it, so I’m quite pleased with myself for ‘inventing’ it. And I love the shadows it casts.

I did eventually get round to a bit of work on the essay.

I made a mind map.

And tonight? Mmm – more faffing around with Photoshop, I think. Or possibly Sumopaint.