Where did last week go?

It seems like only yesterday I was wittering on about French flics – and it’s time to brace myself for ‘Spiral’ again.

It has been a busy week, what with long distance wanders, vet’s appointments [nothing serious, just annual jabs], and last night, a trip with Mr and Mrs Cheddar to see Propeller's ‘Richard III’.

It was brilliant as usual –although I hadn’t realised before that the play was a comedy. OK, a black comedy. OK, more of a black and red comedy. Think Immortal Bard  meets Texas Chainsaw Massacre – except it wasn’t just chainsaws.  Not for the squeamish, but highly recommended if you’ve got a taste for Grand Guignol.

Mmm – interesting – I just Googled ‘Grand Guignol’ to make sure I’d spelled it correctly, and discovered from Wikipedia that it is ‘a genre popular from Elizabethan and Jacobean theatre’. We’d wondered whether it might have been played that way in Shakespeare’s time – looks like it could have been.

Despite all these shenanigans, there has been some progress on the RP and PMS.  My research process:

This is the result for William Blake. One of my colleagues was told her RP was too neat – not a problem I have.

Joking apart [though probably not for long], I am finding it a much more useful process than I expected. The process of trying to define an artist’s book led to me formulating a series of questions, which I've been using to analyse the books/works I’m looking at – and that has given me lots of ideas. Which I suppose is the point of it all really. 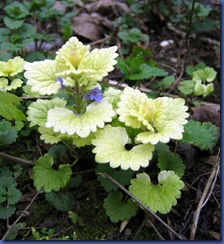 For the PMS, I have taken some photographs of flowers – anyone know what this is, the knowledge I acquired at my mother’s knee has deserted me? 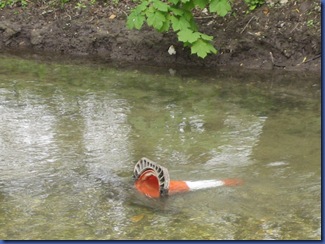 And of litter.  I know what this is, it’s a traffic cone in the Itchen Navigation.

Of course, when I did have some free time today – I couldn’t think what to do. So true to my resolution to be more organised – I collected all the scrappy little notes I’d made and made a list.

Number 2 on the list [number 1 is always ‘make a list’ – so I’ve always got something to cross off] was to work in the drumleaf book.

Now you may remember me wittering about how I liked this binding because there was no stitch in the middle of the page.

So what did I do? 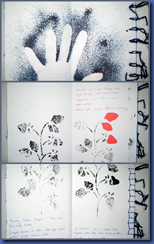 I added some stitch. Fringes at the top, a completely non-functional stab binding type stitch at the bottom. And in the middle is my serendipitous discovery. As you may have realised, I like to make holes in my pages – but when I tried to cut these holes i realised that because the pages are double, but only stuck together at the spine and fore edge – it is possible to cut one side and not the other.

You can either leave it like that, and get an interesting shadow effect on the other side – or you can slip a piece of contrasting paper in between. [The middle and bottom shots are two different spreads, I cut old A3 paper in half to make the book.]

Number 3 on the list was to sort out all the printouts I had lying around the work room.

And that’s when I got side-tracked. 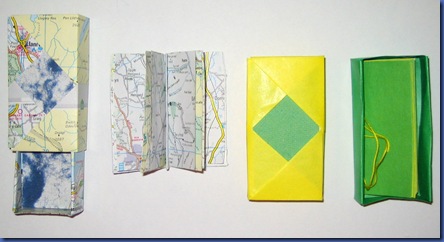 One of the bits of paper lying around was a print out of this. I started with some origami paper, as suggested – and then some bits of old atlas fell out of the same folder – plus a scrap of hand made paper.

I decided to keep it on topic and make little books to go inside – which means I have made 4 matchbox sized books in matchbox sized boxes. For the first time in my life I appear to be making a series.

I wonder how I'll get side-tracked tomorrow?

is the plant a version of coleus?
Do a Google image search and you will see they can look like just about anything!
Sandy