My Luddite tendencies have been confirmed…

by events over the last few days. Cameras, computers, cars.

On Tuesday i took my camera when we took Babybel to the Verwood Heavy Horse Centre. I thought she’d love it – she did. I thought there would be plenty of photo opportunities – there were. I was snapping away – when I realised the card was missing from my camera. It was still plugged into this lap top. Wouldn't have happened in the days of film. [OK, there are some advantages of digital over film when you are a lousy photographer – and it was my own fault].

Got home afterwards to discover that our newly installed Infinity broadband was all too finite. Tried BT Broadband Desktop Help which helpfully told me that broadband was down [&*%$!#!] and failed dismally to do anything about it. Phoned BT’s helpline, which helpfully told me what to try if I could get on line [&*%$!#!] and if not to try Desktop Help [&*%$!#!] before putting me through to India – where a less helpful gentleman than I have spoken to before told me that it was a line fault but they would kindly repair it free of charge. [&*%$!#! – I should think so – it’s rented and we pay enough for it] but they couldn’t come out to do anything about it till Thursday – which was the day we were supposed to be going away. [&*%$!#!]

So we still managed to get to Liverpool in reasonable time – although our planned stroll along the riverside, to look at this which happened to be in port, was put off due to the weather. [Not at all my idea of a holiday – a holiday with 3000 other people in a floating tower block? I think not.]

A couple of days in Liverpool was much more to my taste – the Walker Art Gallery for a selection of these and this, a stroll round under this in the Catholic Cathedral

and our by now traditional visit to these gentlemen. 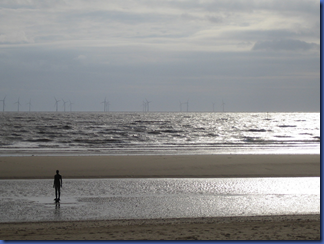 It was cold and windy but the light was wonderful.

We finished our arty few days with a diversion via the Yorkshire Sculpture Park – where the car alarm decided to malfunction. Fortunately, one side effect of transporting other peoples’ dogs is that we know how to disable the movement sensor, which solved the problem temporarily – and  the car is already booked in for some increasingly expensive repairs.

We only had time for a quick visit to YSP – but we’ll be back.

Now I’m just waiting to see what else breaks down…