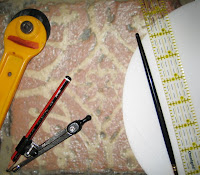 Still working on the tiles - but a different technique today.
Initially I thought I would make a string stamp for this one but then I realised that the lines crossed several times and crossing lines are not a good thing in a string stamp.
So I decided to make a polystyrene stamp instead. Now you can buy the proper stuff for making these stamps, but it is about 70p a piece.
Or you can buy a frozen pizza, enjoy the pizza and get the sheet of polystyrene under it for free. Guess which one I used? Of course it isn't such good quality as the real stuff [I've used both and there is a difference] - but I'm a cheapskate - and it's recycling!

N.B. - I didn't use my good rotary cutter to cut the polystyrene - I have a spare one, in which I put old blades, and keep it for paper and other non-textile stuff . It is carefully marked with nail varnish to prevent unfortunate mistakes. You can cut the polystyrene with scissors but the rotary cutter gives a cleaner cut.
The lines were drawn with a sharp pencil, and I used the wrong end of the paintbrush to make the circular marks. Despite practicing on paper first I didn't quite get the proportions right, so I added a few more small circles.

This is the result - I used a terracotta stamp pad and I think it has the feel of old tiles. This could be worked in line stitches and French knots. or perhaps in gold work.

The inverted scan is really moody. One day I must try stamping some of these designs with Lumiere paint on black fabric and see if it gives a similar result to the inverted colour scan.

Hi Celia, I have also used those wonderful pizza bases. Its not being a cheapskate its called being resourceful! Loved the block and the print. Well done. Lesley