It was something she said

Jackie commented that yesterday's tile looked like torn paper - and I thought - 'What if I tried tearing paper?' So a few failed experiments later... [I tried to make snowdrops but it just didn't work so I went back to something closer to the original tile.] 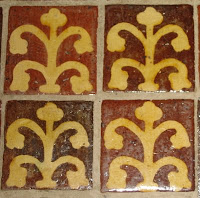 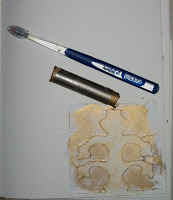 I stuck the stencil down with repositionable spray and rubbed Markal off the edges.
Then I washed it over with a 'Twinkling H2O' knock off which wasn't such a good idea as it reduced the contrast.

I think they look like little men, rather than the original plant forms. In fact they remind me of some specific little men in the Bayeux tapestry. I'm not going to say which ones but they do not appear quite the same in the Victorian reproduction in Reading - or so I've read. [I've just looked back at the original tiles and now they look like little Bayeux men to me too.] 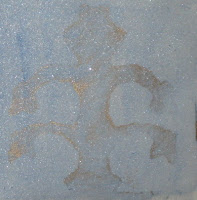 Jackie also said nice things about how tidy my room looked. Of course she couldn't see the pile of junk I moved out of shot before I took each picture ...
On a completely different topic - our High St has suddenly sprouted all sorts of wonderful official graffiti. 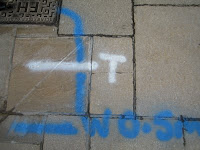 I hoped it meant they were going to repair the historic but ankle twisting surface, but Wensleydale thinks it has more to do with underground services - not some obscure religious observance on the Tube, but things like gas, electricity, sewers etc. Apparently each service has different coloured pipes or cable - hence the different colours of spray paint. 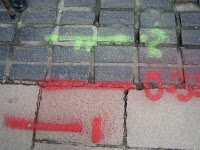 It was difficult to get good photos because I couldn't get high enough up. Of course, everyone thought I was nuts and Wensleydale just stood patiently waiting pretending he wasn't with me. So no change there.