It's been quite a productive day ...

not least because I woke at 5 a.m. and left Wensleydale to doze while I got the day started.

No new stamp, but I did revisit an old one. 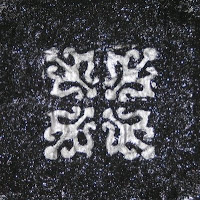 The February challenge on Dyehards Surfacing is a painted quilt - painted after quilting. So this rather messy object was stamped and brushed with glitter after I had free motioned it. I have some heavy silver braid, which I think probably came from Glitterati, so I hope to couch that on tomorrow.

My inspiration came from snow - and tiles. Now there's a surprise. I have discovered from reading Hans van Lemmen's book on 'Medieval Tiles' that some of the earliest have relief patterns on them - which prompted the idea of couching.

I also discovered that the Winchester tiles are relatively simple. compared with those in other places. I don't suppose I would have embarked on all this stamp making if they had looked like this.

I have also finished the embroidery on the Stitched Textile design group challenge, now known as 'There's one in every crowd'. Perhaps more than finished - I am swithering about the beading and may take it off. 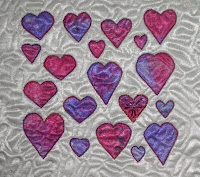 I like the wrong side nearly as much as the right side - or would have done if I hadn't been lazy about starting and finishing off my threads. 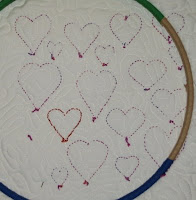 Unfortunately it has told me it wants to be a cushion, and I have no suitable fabric, so there will have to be a stash enhancement exhibition to get some, and a cushion pad. Of course pink and purple won't go with the decor in any of our rooms ...