A correction, a new program, and some good news – maybe…

I have been corrected by Wensleydale for saying that there was no electric light at the Watts Chapel. While I was attempting to photograph the wall paintings, he was inspecting the infrastructure and spotted some lights and some switches - but the switches were not accessible by members of the public. So if you decide to visit the chapel, pick a bright day, unless you have better eyes and a better camera than I have.

Onto another program – the delightfully named ‘Sumopaint’. Like Pixlr it offers both painting and photo manipulation – indeed, the two look quite similar and seem to have many similar tools, although Sumopaint has a useful ‘Undo’ arrow at the bottom left.

Sumo has over 20 filters, and almost all of them allow tuning – in some cases there are lots of sliders and tick boxes to play with. And some of the filters are quite unusual – you can spend hours playing with these, believe me. 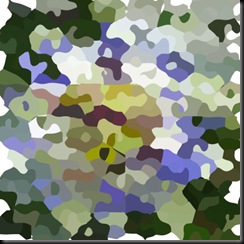 This is the ‘Camouflage’ filter – you can increase the size of the blobs, which  gives quite as abstract effect. 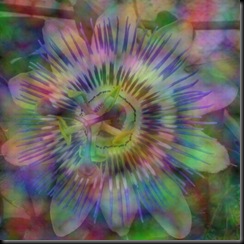 This is the ‘Perlin Noise’ filter – move the ‘Pattern Alpha’ slider to the left to combine the original image and the lovely coloured swirls. 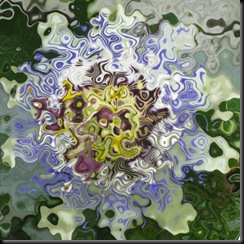 This is ‘Ripple’ – again you can adjust the size … 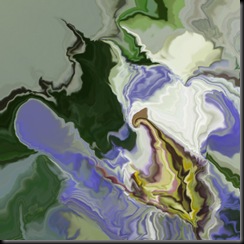 as you can on ‘Waves’ – which allows you to change  a lot of other things as well, which I don’t pretend to understand, but I love the results. 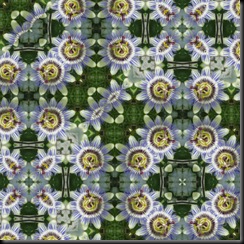 The same is true of ‘Wave Lab’ – there are 13 different things you can adjust. I knew what sines and cosines etc. were once, honest, but I never associated them with lovely patterns.

This is Wavelab Complex. 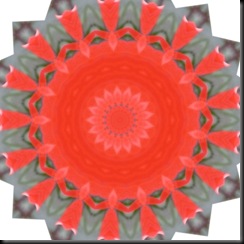 Wavelab can give an effect similar to that which  other programs call ‘Kaleidoscope’, but Sumo’s Kaleidoscope gives you something a bit more traditional. [It’s the dahlia, that’s why it’s gone red.] 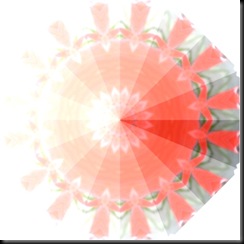 I think this would make a wonderful patchwork Christmas tree skirt – especially for hand dyers who can dye gradations. [You know who you are!] 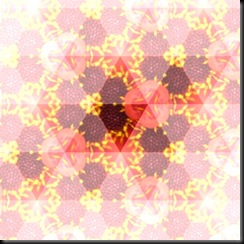 This is another one for quilters - ‘Triangle Pattern’, also  with the ‘Transparency’  slider moved about half way across. 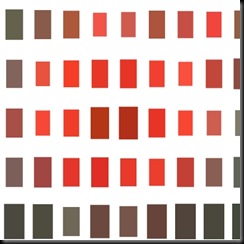 Another quilt? The thing i like best about Sumopaint is that the ‘ordinary’ filters which most programs have [this is ‘Pixelate’] become extraordinary when you play around with all the sliders and tick boxes. Most programmes allow you to change the size of the pixels – Sumo lets you do that, and choose circles or squares, 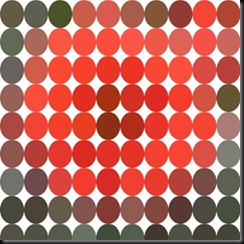 which can be ovals or rectangles.  Sixties curtain material, anyone? 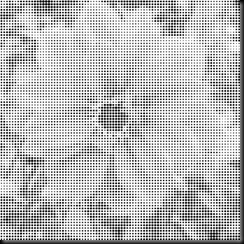 Take another example. Lots of programs have ‘Half Tone’ – and usually you can play around with the size of the dots, and sometimes the shape too.

This looks a bit ‘blah’ doesn’t it? 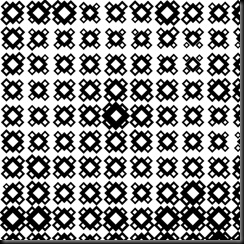 Change one or more of 11 different characteristics, and interesting things begin to happen – another patchwork pattern? 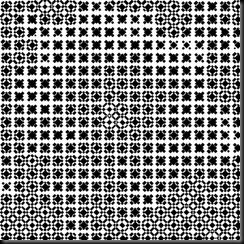 Or blackwork? To be honest, you will only get ideas for shading as the individual units are restricted in pattern – but still worth a play.

There are a few little niggles. Occasionally the image disappeared or the program froze. The ‘Help’ section is not particularly helpful if you are a novice. And most frustrating of all, although I asked Sumo to save the images to my computer as JPEGs, on several occasions it saved them as BMPs – which you can't open in Picasa. I was able to open them with Windows Picture and Fax viewer, and save them from that as JPEGs, but it caused a few minutes of panic while I tried to work out what to do. [Don’t be fooled by this paragraph into thinking I know what I’m doing – I don’t – it was inspired guesswork!]

And after all that, I nearly forgot  the good [albeit scary] news. I mentioned before that there is something I really want to do but I daren’t say too much about in in case I jinx it.

Well – I've got an interview for it on Monday. [No, not a job, I've finished with all that, thank you very much.] And I’ve got to take portfolio. Guess what I’ll be doing this weekend?

good luck with your 'interview'!

Good Luck Celia, and look forward to hearing how it all goes. Best wishes
Lesley