I’ve had a good afternoon. 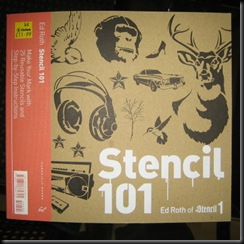 To begin at the beginning – when I wandered into the Oxfam shop earlier in the week, and bought some wooden stamps, I also bought this book by Ed Roth. Which has a little bit about how to stencil  and a lot of pre-cut stencils. [Still the Banksy influence, you notice.]

It also recommends this 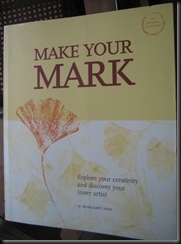 book by Margaret Peot - which I bought, sight unseen, from ABE Books. And I'm glad I did – I only wish I'd had it last year for Contemporary Textiles.

It is one of those books which takes something you know about and expands it a bit – or a lot. Or it did for me, anyway.

So I started, like the book,  with stencilling and using masks. 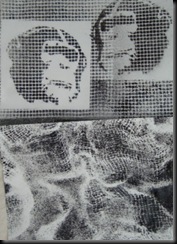 Like this.  The chimp came from the Stencil 101 book, but the idea of putting it over a bit of rug canvas, and spraying through the lot, came from Peot.

The piece underneath was done with a crumpled bit of hessian as a mask. I also tried dress net which didn’t work so well, perhaps because it was too small and springy to scrumple well.

When I blotted the stencil with kitchen towels I got these.

Peot uses acrylic and something called a Preval spray – I used Brusho and an Arty’s pump sprayer. [Anyone know a good way to unbung them when they stop spraying? Or 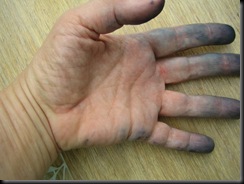 is it just me who wrecks them?]

The other instruction I ignored was to wear rubber gloves - 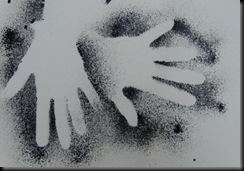 Athough I did wear one for this. But I still got Brusho up my arm.

Peot encourages you to stick to black and white initially, although later in the book she moves on to lemon juice. [I kid you not.] 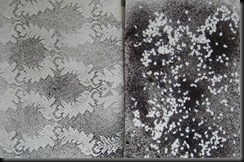 These are lace – and rolled oats… 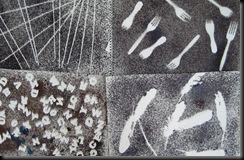 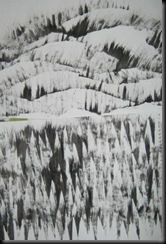 Then I moved on to brushes [one with bits cut out of it to make jagged marks], sponges,  and torn or cut masks.

Right at the end of the book Peot mentions the scary word ‘draw’ and suggests you try drawing into your stencilled/printed/blotted/whatevered pieces. Which will have to wait for another day.

These were all done on paper but would work equally well, I think, on fabric – though probably not using Brusho.

For once I have a bit of embroidery to show you, although 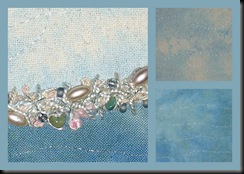 I can’t show the whole thing, because it is for ‘Art Quilts Around the World’ and is embargoed until the end of the month.  The title is ‘Where the Land meets the Sea’. Not quite finished yet, but very close. No, not more encrustation – I think there’s quite enough. 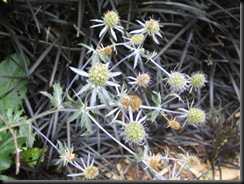 Today’s ‘flower’ is a tiny thistle [?] we spotted at the Hillier Gardens – wonderful shapes, definitely calling out for French knots and straight stitches. Or beads, if we wanted to get really 3D.