for nice comments, which give me something to post about.

First, thanks to Lynne for confirming that other Oxfam shops are stocking crafty bits – well, at least those in the S

outh of England. Of course her post encouraged me to go back in again this morning and buy a couple more stamps – and some glitzy patchwork pieces – and a  second-hand jigsaw for Babybel – and a book – and some wooden letters as stencil substitutes …

Lynne said she had wondered whether they would stamp very well – so I thought I would try mine out. 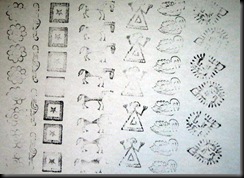 First I tried a stamp pad.  Mmm – not very impressive. [Not all of these are Oxfam stamps, by the way, the paisley shape and the human [?] figure came from elsewhere – and cost twice as much.] 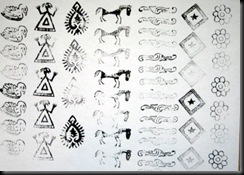 Then I tried some runny acrylic paint applied with a roller. Much better – and would probably have been better still with a pad of newspaper under the paper. I love that horse. 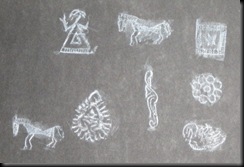 Then I tried rubbings. I couldn’t find a black crayon so used white on black paper. This was a bit tricky because the stamps are quite deep and the paper tends to slide around – but nice results. Could be interesting to try fabric crayons  – and fabric should be easier to use.

Another thing I thought they might be good for – but didn’t try – was ironing Angelina over.

And having looked at Lynne’s interesting blog, and spotted her lovely metal framed mirror, I wondered if you could mould soft metal over them. Never having tried this I have no idea if it is possible – but might be worth a try.

As I had the stamp pad out, I tried the next chapter from Margaret Peot’s book – making eraser stamps. Peot suggests cutting erasers into squares – as my erasers were 2cm wide this gave me smaller ones than I would usually use. She gives suggestions [definitely not prescriptions] for ways to cut them, and then to make patterns with them. As I am into letter forms at the moment [graffiti again] I did my own thing.

My intention was to make a few basic forms 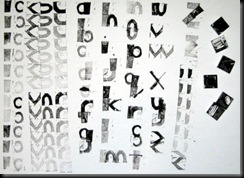 [essentially variations of sticks and balls – you can take the woman out of the primary school but you can never take the primary teacher out of the woman] and use then to form letters. And, as you can see, it worked – more or less. I had real problems with ‘z’ and ended up carving an extra short narrow stick – also needed for ‘e’. I haven’t tried upper case yet but I like the anarchy of these lower case ones. The erasers were made by Staedtler and had ‘S’ patterns on them, but I like the effect of that too.

And finally – thanks to Leah and Kitty for their comments on ‘Nanny’. Truth be told, I’m so delighted that Babybel has a name for me that I don’t mind it being ‘Nanny’.

Kitty said that she had called her grandparents after their pets. Mmm. TS Eliot pointed out that cats have many names, and that is certainly true of Quality Control. The vet knows her as Custard [her sister is Roobarb] but I don’t think I want to be called that. Her other names include Tiddles, Moggins and Mogbad the Bad – older readers may detect the influence of long-gone BBC children’s programmes here.

Of them all, I think I prefer Mogbad. ‘If you can’t be a good example, be an awful warning.’ 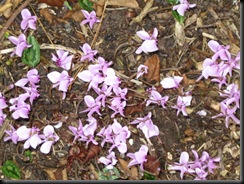 For once – here is a seasonal flower – although they surprise me every autumn. Another favourite – especially, of course, the purple ones.

These are at the Hillier Gardens, but I think our own cyclamen display is better. Smaller, but thicker. I might potter outside later and photograph them for comparison.

I stamped my Oxfam stamps with Ranger paint dabbers and they worked very well. I went back this morning and got the horse but haven't tried it yet. Thanks for the link to my blog and your kind words!

How about a bit of velvet embossing? Unlike most regular stamps, wooden ones don't melt...