[apart from some Picasa collages], as we’ve been out and I don’t have enough time to write in detail.

As an avid reader of the ‘What’s on’ section of ‘Embroidery’ magazine, I had spotted an embroidery exhibition at Clandon Park, near Guildford. We decided to combine it with a return visit to the Watts Memorial Chapel, which was on the way. 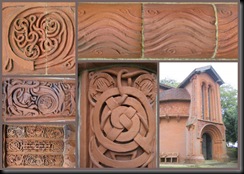 I can’t remember if I’ve written about the Chapel before, but it is a wonderful building – these are some shots of the outside. 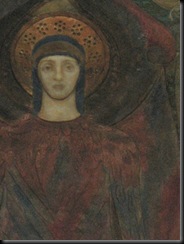 Unfortunately it was a grey day and there is no electric light inside, so my little camera and its soon-to-be-replaced battery struggled. But here’s one shot for a taster.  The interior of the entire building is painted with these angels – all different, and all in beautiful sombre colours.

Then we went on to Clandon.

Thirty years ago we lived just down the road, and visited several times, but we haven’t been since we moved away. I didn’t really remember much about it – but it is an interesting building, with some interesting textiles, even without an additional exhibition. [The teashop is good too.]

The exhibition is by Iona MacKenzie Laycock. Her pieces are mostly landscapes, of both Surrey and New Zealand [more on the NZ connection blow.] Laycock’s work is unusual and her use of pearlescent paint gives the work a real shine, which contrasts beautifully with the matte of the wool she also uses.

The New Zealand connection is because one of the previous owners of the house, the 4th Earl of Onslow, was Governor of New Zealand. When he left NZ in 1891 he brought ‘Hinemihi’, a Maori meeting house, back with him to erect in his garden.

I was struck by the similarities between the two buildings, because  they have considerable cultural significance for the societies that built them, but also in the way that they are decorated.