but we did go to Netherfield Hall with Mr and Mrs Cheddar – or, to be more accurate, to Basildon Park, the National Trust property which played Netherfield in the other version of ‘Pride and Prejudice’. The one without Colin Firth.

Disappointingly, the house is shrouded in scaffolding at the moment, and the rooms in the film were largely set dressing – but it is an interesting house, and it was lovely to see it full of children enjoying Halloween/half term activities. 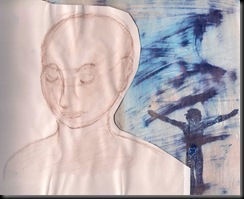 So here’s something creative I made earlier. A sketch, inspired by a sculpture at  ‘Another Place’, and on the following page, a stamp of Da Vinci's Vetruvian man, as another example of an archetypal figure.