You may be wondering 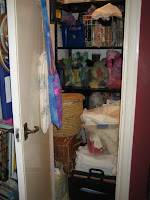 whether any embroidery has been taking place chez Cheese recently. The answer is 'No'. There has been a fair amount of stash sorting and some sewing and knitting - but very little embroidery.
I mentioned my new method of storing fabric in an earlier post. This is the result - a [relatively] neat and tidy stash cupboard. It may not look tidy to you - but believe me compared to what it was like before ....
There are other stash cupboards by the way - this is just the fabric one. Apart from the lining fabric which has a suitcase to itself. Why do I have so much lining fabric when I don't do dress making? It was inherited from my mother. Why did she have so much? Heaven knows - she could have carpeted the house with it and still have spare. And why so much bottle green when she never wore green? But I digress. As usual.
In the course of my sort out I found several bits of embroidery and patchwork which had been begun but not finished. Not really 'works in progress', more that I had got thoroughly bored with them. Some immediately got shoved back on the top shelf - but some I decided to do something with. Like make bags.
As I have mentioned, before I made books when I wanted instant gratification I used to make bags. So I have - er - several - bags. Patchwork, embroidered, knitted, crocheted. What Imelda Marcos was to shoes, I am to hand made bags. Babybel's mum has taken several of the bigger ones off my hands but I still have quite a few small ones. Never mind - I have made a few more. 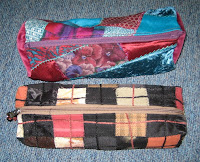 The top one is crazy patchwork. It was originally going to have hand embroidery as well as the machine embroidery - but I decided I would never get round to it, so it has ended up as a giant pencil case. Used up a zip from my stash too. Is it odd to have a zip stash?
I think the one below was originally going to be sliced up for fabric mosaic. [Does anyone else ever find things they don't remember making?] I decided to add some couching instead and it has ended up as a sort of mad plaid. A second over sized pencil case, and another zip gone.. 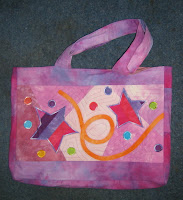 This is one of three panels from a lovely quilt that I started a long time ago. I still like the design but I decided there was no way I was ever going to finish it - applique is just not my thing. So this is the first of three bags. It is pretty big - about 20" by 17" by 3" - patchwork always get measured in Imperial here because that is what my patchwork rulers are!

And now for something completely different - the hydrangea. 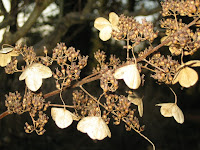 I'm sure there are larches at the Hillier gardens but I didn't photograph one. [And if you don't get that reference, don't worry, it means you are a lot saner than I am - and probably a lot younger too.]
This is my favourite of the photos I took at the gardens - I see free edge applique and French knots. It is not at all my sort of colours - not nearly bright enough - but I don't think I'd change it at all for an embroidery- although I may play around with it in Paint shop Pro later just yo see what happens!
Posted by Cda00uk at 10:35